The Legend of the Wooden Fish in Buddhism 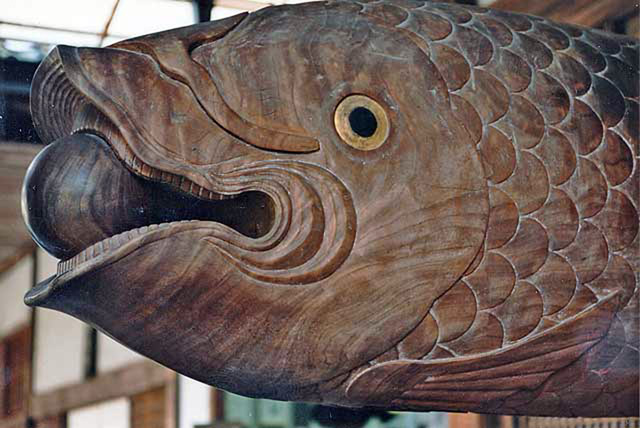 A wooden fish suspended in a Buddhist temple, which is knocked when serving meals. (Image: via Wikimedia Commons)

One legend of the origin of wooden fish in Chinese Buddhism

The story is documented in Xuanzang’s book Zhi Gui Qu. On his return from a pilgrimage to India, Chinese Buddhist Monk Xuanzang met an elderly widower when he was passing through Shu (modern-day Sichuan Province). While the elderly widower was hunting, his stepmother threw his 3-year-old child into the river.

“This is karma because the child obeyed the precept of not killing in its previous life. Therefore, he was able to survive even though he was swallowed.”

The widower asked Xuanzang how he could repay the fish. Xuanzang answered:

“The fish was sacrificed to save the child. There should be a piece of wood carved into the shape of a fish, and suspended in the Buddhist temple. Knock the wooden fish when serving meals. Thus, this great favor can be paid back.”

This is one legend of the origin of wooden fish in Chinese Buddhism.

Another story says the true meaning of the wooden fish should be like the rule found in Bai Zang Qing Gui, Master Bai Zang’s Monastic Regulations: Buddhist monks must knock the wooden fish during sutra chanting. The reason for this regulation is that fish never close their eyes, which means that monks should be ever vigilant to maintain their virtue and study diligently.

In other words, the wooden fish is an important instrument used as a reminder for monks to be ever diligent.