The Beautiful Fugui Cape in Taiwan 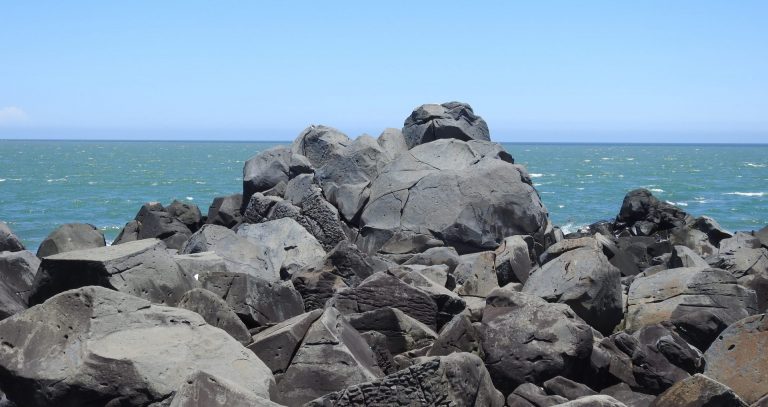 Windkanter (風稜石) is one of the most striking features of Fugui Cape (富貴角) in northern Taiwan. (Image: Billy Shyu via Nspirement)

Situated at the northernmost tip of Taiwan island, Fugui Cape (富貴角) was originally called “Dabin (打賓)” or “Dabian (打鞭),” and was described as “hoek” (small peninsula) by the Dutch in the 18th century. The name was then transliterated as “Fuji,” and was called “Fugui” by local people afterward.

As one of the three most significant capes in Taiwan’s North Coast, Fugui Cape is in fact the dividing line between the Pacific Ocean and the East China Sea. Fugui Cape is known for its beautiful scenes of Windkanter (風稜石), Fugui Cape Lighthouse, Fuji Fishing Harbor (富基魚港), and the beautiful park around.

Windkander, also known as ventifact (wind-faceted stone), is a kind of volcanic rock shaped by wind and sand. It is formed of pieces of stone ejected during eruptions of the Datun Mountain range at the Yangmingshan National Park in northern Taiwan.

Watch the video of the beautiful Fugui Cape in Taipei below:

As a result of long-term abrasion and corrosion by sand-bearing northeasterly monsoon winds, the rocks have smooth, flat-surfaced, knife-like shapes with sharp edges.

Standing firmly on the cape, Fugui Cape Lighthouse is the northernmost point of land of Taiwan island. It is painted black and white to make it more visible in times of fog. With its unique location and eye-catching stripes, the Lighthouse is one of the most striking landmarks on Taiwan’s North Coast.

Built in 1897 during the Japanese occupation period, the lighthouse has been preserved mostly in its original condition. It is one of the three lighthouses that are equipped with a foghorn in Taiwan at present. The foghorn is for warnings in thick fog, as heavy fog occurs in the vicinity of the Cape in fall and winter from time to time.

Another highlight of the Fugui Cape is Fuji Fishing Harbor (富基魚港), where the Fuji Seafood Market with its colorful rooftops is situated. It is a great place for seafood lovers to enjoy fresh seafood cuisine. A wide variety of fresh seafood and high-quality seafood products are displayed and sold.  Visitors can purchase live seafood from vendors and have it cooked by the local restaurant chefs.

With beautiful trails, Fugui Cape Park is a great place to take in the striking Fugui Cape Lighthouse, the nearby ocean, and among other things, the unique trees that have fewer branches and leaves on the top part due to strong northeasterly monsoon winds. Since they are seemingly trimmed with scissors, local people thus refer to them as “Fengjianshu” (Wind-cut Trees 風剪樹).

Standing right by the highway, Shimen Stone Arch (石門洞) is a natural formation cut by sea waves long ago. It is one of the natural wonders along Taiwan’s north coast, and was regarded as the northern-most gate to Taiwan Island. There are trails along the edges of the arch that allow visitors to climb to its top to appreciate the beautiful scenery of the seashore nearby.

Shimen Wedding Plaza (石門婚紗廣場) is another popular spot near the Fugui Cape. With a white Mediterranean-style structure, including a corridor and a bell tower near the green ocean, the wedding plaza is a perfect place for taking photos and enjoying the spectacular scenery of the coast.