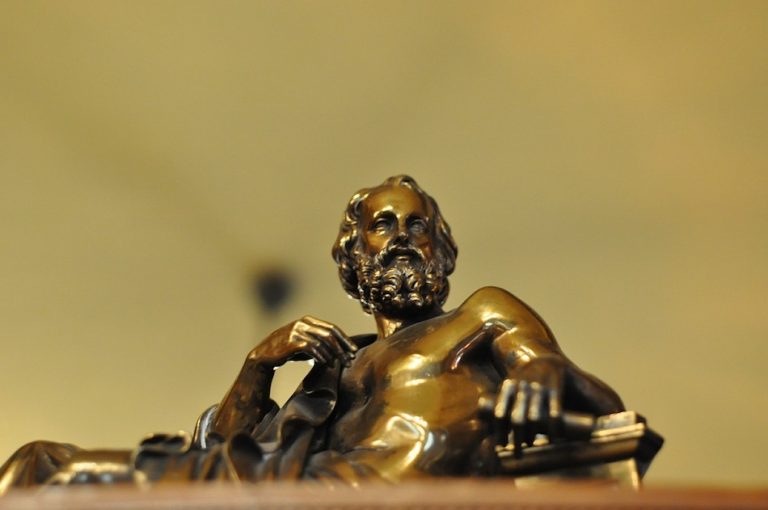 Plato was a Greek philosopher from Athens, the most famous student of Socrates, and the teacher of Aristotle. He was born in Collytus in Attica in 427 B.C. He was the son of an aristocratic father, Ariston, and his mother was Perictione. His father was descended from the ancient Athenian king Kodros (Codrus), and his mother was a descendant of Solon, the Athenian lawgiver.

He had two brothers, Glaucon and Adeimantus. He started off with the name Aristoklis, but was renamed Plato in his teens because he had a wide sternum and forehead. His philosophical dialogues have survived the ages, and they not only exercised enormous influence over ancient Greek philosophy, but more generally, they influenced the entire Western philosophical tradition.

Plato, among others, wrote The Apology of Socrates and The Symposium, where he talks about the nature of love, while The Republic described the ideal State. Thirty-six works are attributed to Plato and all, apart from Apology (of Socrates), are interactive. He was also the founder of the Academia (Academy).

As a child of Athenian noble parents, Plato was educated by the best teachers of the era in philosophy, music, and gymnastics. Initially, he studied poetry and was a poet, but he was also an athlete.

Reading and writing were taught by Dionysius, gymnastics was taught by Ariston the Argeios, and music was taught by Akragantinos Metellos. He was also influenced by Kratylos (Cratylus), a follower of Heraclitus, who dealt with tragic reason.

For Plato, his spiritual and moral compass was established from his encounter with the “Man of Athens,” Socrates, at the age of 20.

It should still be noted that his early personal ambition was probably political, though his relationship with Socratic teachings and their ethos permanently altered his moral and spiritual orientation. This made him destroy his early poetic works and he switched to philosophy.

Moreover, he quickly felt aversion for the violence that had been taking place in the city. After the fall of the oligarchy, he hoped to improve the situation with the restoration of democracy. Eventually, however, Plato found that there was no place for a conscientious person in Athenian politics.

After Socrates was sentenced to death, a legal consequence of asking politico-philosophic questions of his students, Plato, along with other followers of Socrates, escaped to Megara. Plato would have been close to 30 years old.

He had been invited by Dionysius the Elder to try to bring back democracy to politics. However, Plato was sold by the tyrant Dionysius as a slave to someone, because Plato attempted to convince him about the principles of Justice that should govern the exercise of power. He was later freed with a horde of silver coins.

In 387 B.C., Plato was again in his home country where he founded the Academy, which took its name from the place where the Temple of the hero Akadimos stood. In 347 B.C., it is believed that Plato died peacefully in his sleep, and he was buried at the Academy where he taught.

“You can discover more about a person in an hour of play than in a year of conversation.”

“Justice means minding one’s own business and not meddling with other men’s concerns.”

“We are twice armed if we fight with faith.”

“He who commits injustice is ever made more wretched than he who suffers it.”

“For a man to conquer himself is the first and noblest of all victories.”