Daughter Wishes to See Her Mother Released From Prison 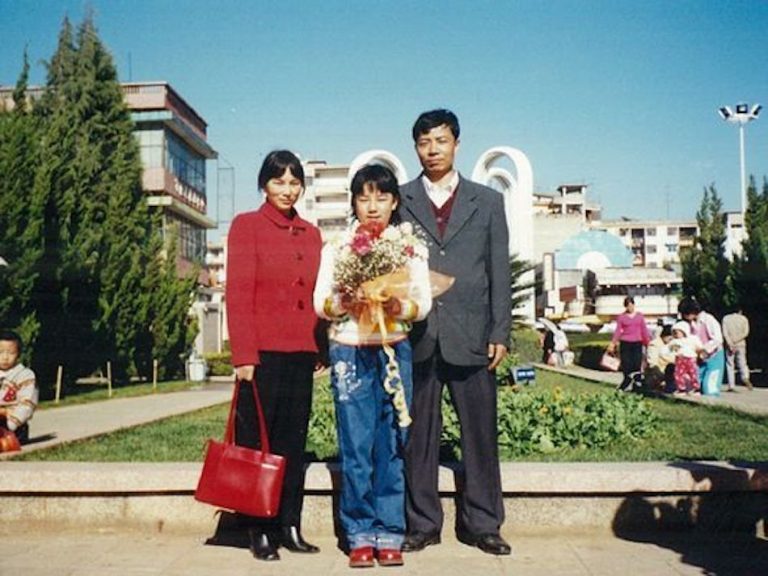 Deng Cuiping with her daughter and husband in China as a happy family before being imprisoned for practicing Truth, Compassion, and Tolerance. (Image: via Iris Lu)

Iris Lu’s parents lived in the rural province of Yunnan. In the 1990s, her mother, Deng Cuiping, started practicing Falun Gong to help relieve stress and insomnia. This was at a time before the persecution began in China, and the parks were packed with people doing the exercises.

Falun Gong, (also known as Falun Dafa) is a cultivation practice consisting of 5 gentle exercises, including a standing and sitting meditation, and it’s based on the three principles of Truth, Compassion, and Tolerance. In 1999, Jiang Zemin’s regime launched a state-sanctioned campaign of persecution, intending to wipe out Falun Gong.

This brutal persecution has seen practitioners thrown into prisons, tortured, and killed for their belief. Eighteen years on and the persecution still continues in China. This is the story of a daughter’s wish to see her mother released from prison.

In an opinion piece that came out on Mother’s Day 2017, here is the introduction that Iris Lu wrote about her mother for USA Today:

“Growing up in a village in China, my mother was also my schoolteacher. She taught me to write my first Chinese characters and sing my first song. Those moments seem like an eternity ago, not only because I am all grown now, but because it has been more than eight months since I last spoke to my mom.

“She’ll be celebrating Mother’s Day alone inside the cell of a Chinese detention center, awaiting transfer to a prison, because she refused to give up her religious belief in Falun Gong.”

This is the third time Iris’s mother has been imprisoned in China for her belief.

Deng’s sister (Iris’s Aunt), who also practices Falun Gong, went missing in the year 2000. Deng was on her way to a peaceful demonstration at Tiananmen Square in reaction to this event to appeal the persecution of Falun Gong, but was arrested at a train station.

She was imprisoned for a month and released on bail. Deng learned that her sister had disappeared after having been arrested at Tiananmen Square a month earlier and sent to a labor camp. Deng’s sister spent a year there before her release.

The second time was in 2006, when a neighbor dobbed in Deng Cuiping. Iris came home from school to find her home ransacked and her mother missing. She spent the next three years in detention with constant torture and pressure to renounce Falun Gong.

It was here that she went on a hunger strike while waiting for a trial. She was also subjected to torture: the guards would stick pins in her and also order the other inmates to do the same toward her. She also damaged her legs and hips from being forced to sit in the same position on a small stool for hours on end.

Deng was lucky to be released from prison alive — 3 years on, her good friend, a doctor and also a practitioner of Falun Dafa who was shocked by electric batons and drugged, died in a hospital in July 2009.

Family life for Iris while her mother was in prison was full of discrimination and constant threats for believing in Truth, Compassion, and Tolerance. She encouraged Iris to fulfill her dream to study and live in America, even though they didn’t have money for tuition or a flight.

Iris ended up with a graduate assistantship in America and earned a degree in accounting. Iris wrote articles for our Nspirement website, and I remember the day we heard the news about her mother.

Although Iris struggled with money, she found work in the university soon after and paid off her debts. She was also granted asylum. She was making plans for her family to join her in the U.S. when the bad news came.

She was arrested again in 2016 for handing out flyers related to Falun Dafa. After a peaceful petition to the government to release her, Iris’s grandmother and father were threatened. Also, Iris’s father, who works at a school, had his managers put pressure on him, saying that if he continued the petition he would be suspended from work.

“On Feb. 27, as I arrived at work, I saw a message from my aunt. My mother had been sentenced to six years in prison. I couldn’t believe my eyes. I could hardly breathe. I felt so small and powerless.”

At the end of Iris’s USA Today article, she heartbreakingly tries to remember her mother and shares a beautiful dream, that we too hope comes true, about the release of her from prison:

“As Mother’s Day approaches, I try remembering what my mom and I talked about the last time we spoke, and what she looked like on the video call. Had I known it would be the last time we would talk for so long, I would have listened to her more patiently. Why didn’t I cherish the time? Why didn’t I get her out of China sooner?

“I had a dream a few months ago that when I called home, my mom answered the phone. I hope this dream can come true soon.”

Please sign the petition below to help fight for Iris’ Mother’s freedom.
https://www.change.org/p/u-s-secretary-of-state-please-help-me-fight-for-my-mother-s-freedom/u/22741548