Famous People From Ancient China: Mencius and His Mother 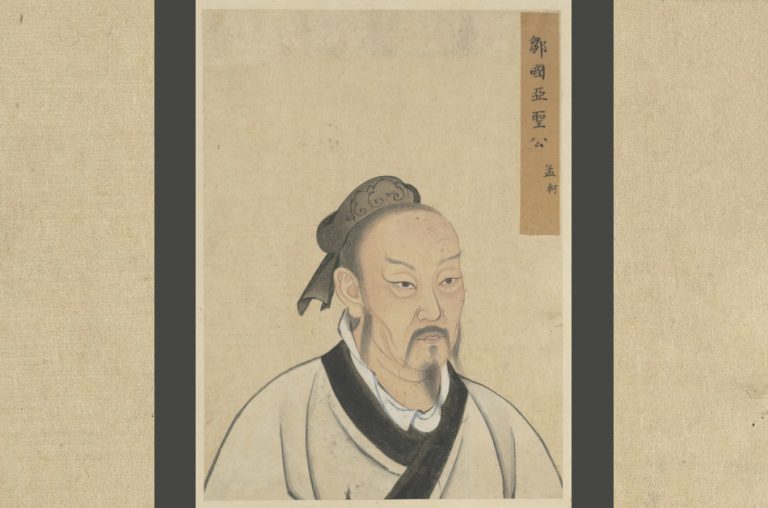 Mencius was greatly inspired by his mother and became one of the most well-known philosophers in Chinese history. (Image: via Wikimedia Commons)

In 375 B.C., a boy was born in Zou County, Shandong Province, to one of the many famous people from ancient China. The boy’s birth name was Meng Ke, but he later became known as Mencius, one of the most well-known philosophers in Chinese history.

When Mencius was 3 years old, his father passed away. His mother, Zhang, had to raise him alone. In Chinese culture, Zhang was an exemplary female figure and mother. One of the most famous Chinese phrases coming from her story is “Mencius’s mother moved three times.” What is its meaning?

Mencius and his mother lived near a cemetery. He often saw burials and started to mimic those who cried during the funeral ceremonies. His mother did not think such an environment was good for him, so they moved to an area near a market.

There were shops everywhere. The businessmen were always showing off and telling tales about their travels. Mencius started to imitate the businessmen. His mother began to worry again, thinking it wasn’t a good thing for a child to learn how to boast. After careful consideration, they moved again.

Mencius’s mother learned her lesson; this time, she moved near a school. Most of the people Mencius saw were intellectuals who behaved properly and spoke with proper decorum. Growing up in such an environment, he learned the essential etiquette for various occasions. He behaved like a gentleman, gracefully and courteously.

Mencius’s mother was very pleased: “This is where I can raise my son!” Submerged in this environment, Mencius started studying and learning. With his mother’s help, he learned the six classical arts, and became one of the most well-known scholars.

When Mencius and his mother were living near the market, there were many meat vendors. His mother made a living by weaving and selling the cloth. She made little money and could not afford to buy meat.

One day, Mencius heard one of his neighbors slaughtering a pig and asked his busy mother: “Why do they kill the pig they raised?” His mother, occupied by her chores, answered without thinking: “So that you can have meat in your meal.” He was excited and clapped his hands: “I can eat meat!”

Seeing that her son took her literally and believed her, she thought: “I shouldn’t lie to my child. He is beginning to understand things, and I lied to him. It’s not a big deal having no meat to eat, but it would be terrible if he learns to lie from me, and starts lying to others.” To make up for her mistake, his mother bought a piece of meat with the little money she had and cooked it for him.

Cutting a piece of cloth teaches a lesson

When Mencius was going to school, one day he skipped class. He heard other children playing outside and decided to sneak out of the class to join the other children. When Mencius went home, his mother was weaving. As soon as she saw his dirty clothes, she knew what had happened. She asked: “Did you just get out of class?” “I skipped class,” he answered honestly.

His mother asked him to come near the loom. She picked up a pair of scissors and cut a piece of cloth in half. She said to Mencius:

“If you want to be a true scholar, you have to learn and study wholeheartedly. Otherwise, you will end up like this piece of cloth. It took me a long time to weave it, inch by inch. Now, I cut it in half and it is worthless. Only when you study steadfastly can you do well in class.

“If you quit half way, you will end up like this piece of cloth that can’t be used for anything.”

Mencius was greatly inspired by his mother and the lessons she taught him. He began to study diligently, and finally became a master in Confucianism, and was well respected by later generations.