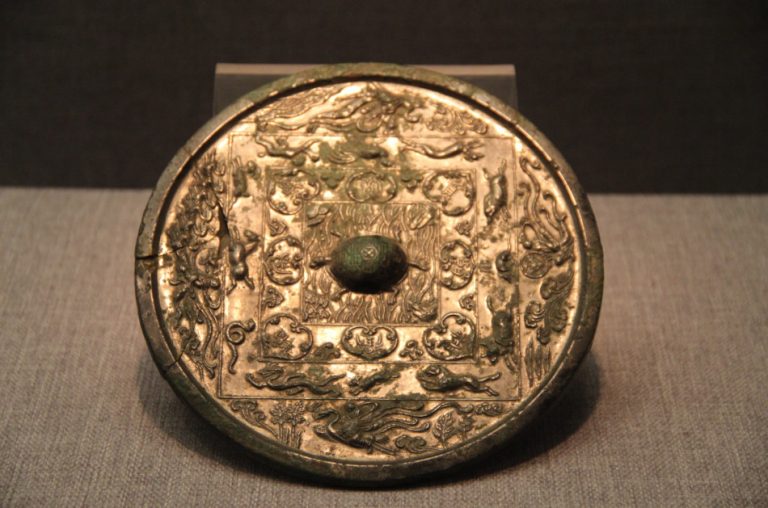 Bronze mirrors have a 4,000 year history in China. (Image: Gary Todd via Flickr)

Chinese bronze mirrors have a 4,000-year history in China. Not until the later period of the Qing Dynasty were they gradually replaced by glass mirrors. Producing a bronze mirror was an art. The reverse sides were frequently cast with exquisite decorative motifs and Chinese calligraphy.

Among the various metal-based inventions in ancient China, bronze mirrors have the longest history and were the most widespread. They far exceeded just providing a reflective surface to see one’s face.

They contained many Chinese cultural connotations. Old Chinese phrases such as “A broken mirror made whole again” (resuming a broken marriage), “A bright mirror hung high” (describing the impartiality and strictness of a judge in trying cases), and “Take history as a mirror and learn a lesson from it” all show how bronze mirrors became an inseparable part of Chinese culture.

In the 1970s, two bronze mirrors were excavated from ancient tombs of the Qijia cultural ruins. One was found in Gansu Province and the other in Qinghai Province. They were made more than 4,000 years ago, and represent some of the earliest known bronze mirrors.

During the era of the Warring States (403-221 B.C.), bronze mirrors usually had a light body, delicate engravings, and a streamlined design. The shape of the mirror was mostly round, while the decorative figures were petals, leaves, rope patterns, animals, and birds.

The Han Dynasty (206 B.C.-A.D. 220) was an important period in the development of bronze mirrors. The mirror kept its basic round shape; however, text characters such as “sunlight” (riguang 日光) and “clear and bright” (zhoaming 昭明) were inscribed on them.

In the Tang Dynasty (A.D. 618-907), round mirrors, square mirrors, and more complex designs appeared. Round mirrors using a water chestnut flower motif were the most popular. New decorative patterns resembling grapes, birds, and animals were introduced during this time.

Designs resembling the moon palace, celestial beings, and nature scenes were cast onto mirrors to represent the concepts, lifestyles, pursuits, and joys of society and its people.

In the early days of the Han Dynasty, mirror engravings were mostly of grass, stars, clouds, and auspicious characters. This is in contrast to Tang Dynasty engravings of unicorns, horses, phoenixes, lions, and various flowers that originated from Central Asia — they symbolized the glory and splendor of the dynasty at its peak.

The different styles represented the varying tastes of ancient peoples in different eras. This is valuable for understanding aesthetic perspectives and how they changed.

Bronze mirrors were manufactured in such a refined way that they have resisted corrosion after thousands of years buried underground. The casting and anti-corrosion techniques employed in making bronze mirrors still remain a mystery.

Here are some of the occasions in which bronze mirrors were used:

As an article of daily use, the bronze mirror was surely a decent candidate as a funerary object.

The beauty and practicality of bronze mirrors made them ideal gifts for royal families and nobility.

Chinese bronze mirrors symbolize the “full moon and blooming flowers” of a perfect marriage. The idiom “A broken mirror made whole again,” referring to a couple reuniting, exemplifies this. Bronze mirrors were mostly round, a shape that was linked to perfection, reunion, and luck in ancient China. The round shape also represented the happiness of love and marriage.

Ancient people did not understand the principles of light reflection. They believed bronze mirrors possessed the extraordinary power to emit light. So bronze mirrors were regarded as treasured implements to dispel evil spirits.