Lured into America for Prostitution by Chinese Agents 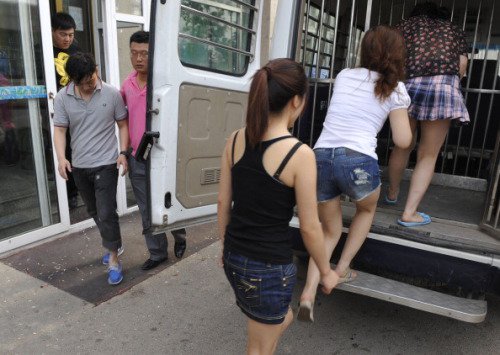 Women being arrested for prostitution. (Image: via Getty Images)

Many Chinese women get lured to America by Mainland Chinese agents only to find that a promised “career” was actually sexual service. Deceived by job ads offering “$10,000 USD a month with board and travel,” those women thus attracted to America fall into the hands of human traffickers and are forced into prostitution by Chinese agents.

“These females are 44 years old on average. Through the care of our organization workers, the victims gradually regain confidence and become free from their nightmares.”

Most of these women come to America alone. Due to the language barrier, they are easily brainwashed by human traffickers. Since the collaboration between “Garden of Hope New York” and the city’s Criminal Court began in 2015, Liu has rescued about 300 victims. Liu reported:

“The 40-year-old woman was married with kids. Due to the heavy financial burden on her shoulders, she took the offer on the spot and then borrowed from relatives and loan sharks to pay the expensive commission. She didn’t learn that the job was prostitution until she had arrived in America by herself.”

Chinese women are forced into prostitution

Liu points out that this woman’s experience is typical. After getting the women to America, the traffickers tell them:

“You have no residential status and your English is poor. What other kind of job can you do?”

The women are then either brainwashed or drugged into compliance. Some women may run away, but many have nobody to turn to, so they do sexual massage or are forced into prostitution by Chinese agents.

Beginning in September 2013, the Criminal Court of New York City no longer treats unlicensed massage or prostitution as common crimes. As long as the defendants meet the conditions that they operated under “coercion, deceit, and threat” as described in “The Trafficking Victims Protection Act,” they may stay in America to work at legitimate jobs.

Currently, many of those rescued take jobs in manicure salons, restaurants, and janitorial services.