The History of Silk in Ancient China 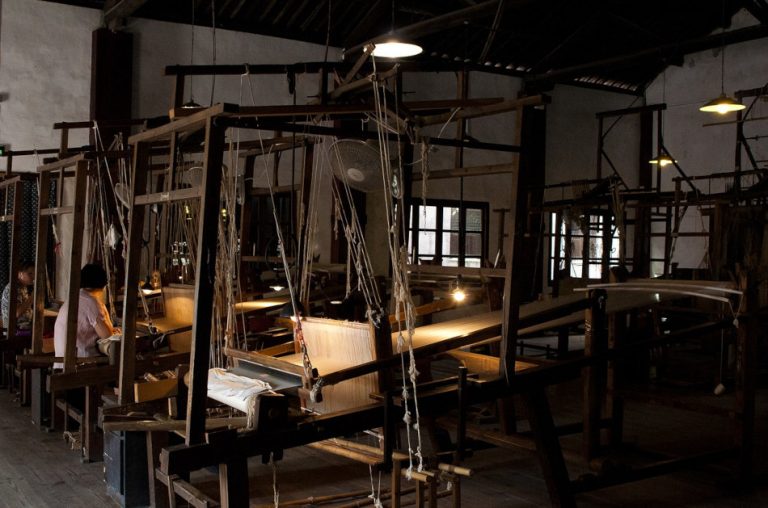 Of all Chinese inventions, silk (絲 sī) is perhaps the oldest. (Image via pixabay / CC0 1.0)

Of all Chinese inventions, the history of silk (絲 sī) is perhaps the oldest. Traces of silk fabric have been found among remains from around 1300 B.C. The use of silk in China possibly goes back even much earlier. It’s said that until the second century B.C., silk remained an article known only to the Chinese.

A Chinese encyclopedia written in the 16th century describes ancient Chinese technology. This great work of literature was written by cosmologist Song Yingxing (宋應星), who presented readers with many wonderful and superb ancient Chinese inventions! In volume 7, we learn through pictures and text about silk, that invention of ancient times that so typifies the Chinese way of life.

How did the East and West establish trade?

During the second century, there was an event of great importance to the East and the West alike. Fierce tribes of nomads called the Huns (匈奴 Xiōngnú) were constantly attacking China (these tribes were later driven west by China and may have been the Huns who invaded Europe).

To deal with the conflicts, the Chinese emperor in the year 138 B.C. sent forth a diplomatic mission, headed by Zhang Qian (張騫). The mission sought to cross the arid wastes of Central Asia (西亞 Xīyǎ) to find and make an alliance with a certain friendly tribe there, who could be an ally to help defeat the Huns.

But soon after leaving China, Zhang Qian and his men were captured by those very Huns and held as prisoners. Not until 12 years later did Zhang manage to return to the Chinese capital.

Well before the birth of Jesus, these garrisons became the beginning of a trade route that linked China to the West — thus, the Silk Road was born. It crossed Turkmenistan (土庫曼 Tǔkùmàn), passed through Persia, and reached the eastern shore of the Mediterranean Sea.

From there, ships could continue the journey to Rome. Thus were Rome and China, then the two most powerful empires in the world, linked together by trade.

The most important product that was sent to Rome from China over this route was silk. Because of its high value and lightweight, silk was the ideal product for caravans making the extremely long journey. Much silk was transported over this route. Hence, it became known as the Silk Road (絲路 Sī lù).

In return for the silk, the Roman Empire sent China precious stones, wool, asbestos, and glass. Yet none of these products could compare in value to the precious silk. Woven into a semi-transparent gauze, silk became the fashion among the Roman ladies. (Derk Bodde from University of Pennsylvania: China’s Gifts to the West, 1942)

After the collapse of Rome in A.D. 476, the silk trade continued with Byzantium (Constantinople), the leading center of European civilization in the Middle Ages. During this time, Europeans still had no clear idea of how silk was produced.

In the middle of the sixth century, the Byzantine emperor sent some monks eastward to learn the secrets of silk and silk making. They carried back with them precious silkworm eggs. From these eggs descended the countless millions of silkworms that have since spread throughout Europe. Today, most European silk is made in Italy and France.

This is how silk spread from the East to the West. Today, people use a lot of artificial, man-made, or cheap plastic imitations instead of natural things. Is humankind going forward? Or backward? Perhaps Lao Zi’s (老子) teachings give us the answer:

道法自然  The Tao follows what is natural