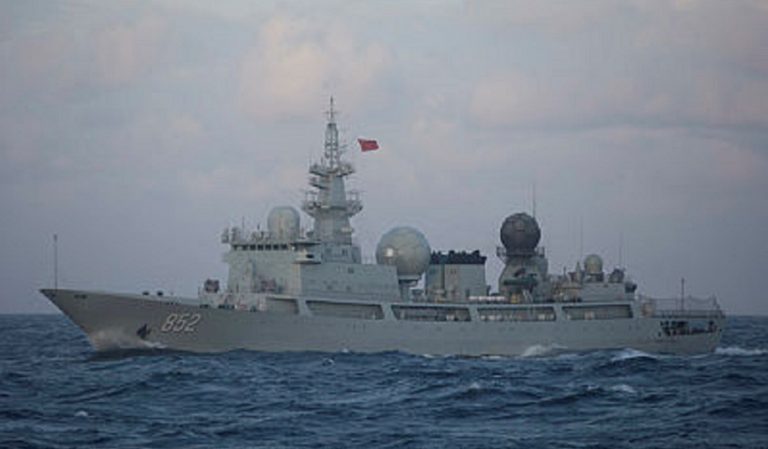 The report first emphasized that the U.S. government has undergone a major shift in the strategic positioning towards China from being a beneficial stakeholder to being a major opponent and the U.S. policy towards China has gone from contact strategy to containment strategy. (Image: Commonwealth of Australia, Department of Defense)

The presence of a Chinese Navy spy ship monitoring large U.S.-Australia war games on the Queensland coast has been described as provocative by senior Australian military officials.

“The Chinese vessel has remained outside Australian territorial waters, but inside the Australian Exclusive Economic Zone in the Coral Sea,” the department told the ABC in a statement.

“Exercise Talisman Sabre is currently taking place in the vicinity. The vessel’s presence has not detracted from the exercise objectives,” it added.

The U.S.-Australia exercise also has service personnel from New Zealand, Japan, and Canada participating in the three-week-long maneuvers. As part of the war games is a 33-strong fleet of multinational warships and submarines, including a carrier strike group led by the USS Ronald Reagan.

The ABC reported anonymous senior Australian defense officials who were unimpressed by the Chinese Navy spy ship’s presence, which they said was provocative and unfriendly.

International security expert Euan Graham from the Lowy Institute told the national broadcaster that he was unaware of “any publicized appearance of an AGI off the Australian coast before.”

Associate Professor Justin Hastings, from the University of Sydney, told Fairfax media that the deployment of the Chinese Navy spy vessel to the area was not illegal, but agreed it was provocative and aggressive.

“In general, China has been more aggressive in monitoring the U.S. and its allies’ movements through its naval vessels in the past five years or so,” Associate Professor Hastings said.

The appearance of the Chinese spy ship lurking off the Australian coast came just days after similar vessels appeared off the coasts of Alaska, India, and Guam, reported news.com.au.

This has likewise occurred amid other international tensions involving Beijing — a current stand-off on the China-India border, Beijing’s aspirations in the South China Sea, and disputes with Japan in the East China Sea.

Watch this episode of China Uncensored about  Vietnam-China tensions over oil in the South China Sea: