Being the Child of a Rights Lawyer in China Is Brutal 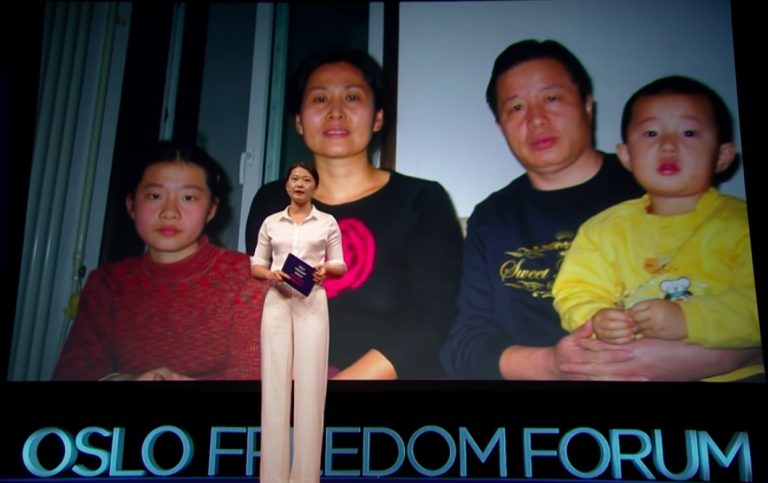 Grace Gao delivering her talk during Oslo Freedom Forum. In the background is her family photo taken when she was a child. (Image: Screenshot via YouTube)

Grace Gao is the brave daughter of a brave man, Chinese human rights lawyer Gao Zhisheng. It’s not easy being the child of a rights lawyer in China.

In the video from the Oslo Freedom Forum, Grace recently described how her family was torn apart by China’s ruling communists because of her father’s rights work.

“Most of my father’s clients were the most mistreated and vulnerable people in China. All my life he was helping them with all his energy and light,” Grace said at the forum. “Unfortunately, this made him a target of the government.”

Among those who Gao tried to help were Falun Gong practitioners and house Christians.

Most of his clients were taken on as pro-bono cases, said Grace, but in 2005, the authorities closed down his Beijing law firm. That was the same year that Gao publicly announced his membership withdrawal from the Chinese Communist Party.

“I constantly lived in fear of losing him, and often I woke up with the sound of my mom weeping,” Grace said.

“At one point, we were under constant 24-hour surveillance. There were eight police officials [who] lived in our home at all times. They literally watched us eat and sleep. They even watched me shower,” she said.

“Another group of eight officials followed me to school everyday. They beat me up sometimes in front of other students,” Grace said.

Students at her school were also warned not to talk to her; otherwise, their parents would be jailed just like her father. Gao’s first arrest, for his work and activism, was in 2006.

The pressure and harassment eventually resulted in Grace not being able to attend school.

“I have nightmares from the trauma, and I even started resenting my father,” she said. At one stage, Grace begged her father to give up what he was doing so their family could have a normal life.

“I was [then] too young to understand the sacrifices he made; I was too young to realize the greater good he was fighting for,” she said.

January 9, 2009, was the last day that the family was together. Gao’s wife and two children fled Thailand while he remained in China.

Later that year, he was disappeared and imprisoned by the state, while his family eventually arrived in the U.S. as political refugees.

“During eight years of imprisonment, he was physically tortured, deprived of food, and kept in solitary confinement for a long period of time,” Grace said.

In 2014, her father was released, but today remains under house arrest.

“He lost all of his teeth due to the torture, and until now we still have limited contact with him,” she said.

"Please do not ignore the human rights abuses being done by the Chinese government. Do not stay silent." -Grace Gao @GaoZhisheng #OsloFF pic.twitter.com/15xdkjSeSA

After reading a letter from her father in the forum video, Grace said that what her family experienced is one shared by many other Chinese families.

“There are tens of thousands of families like ours in China. Eight years have passed since my own escape, but China’s situation has become even more worse,” Grace said.

“Today, I am speaking out on the behalf of all the [children] who have lost their family members at the hands of the Chinese government,” she said.

Watch another China-related Oslo Freedom Forum given last year by beauty queen Anastasia Lin describing how her father in China was harassed by the government because of her activism: