Navel Moxibustion, and What It Can Do for You 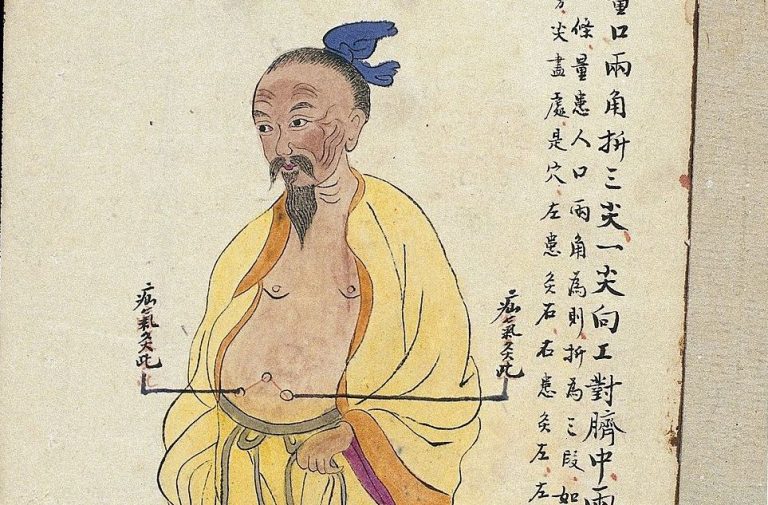 In Chinese medicine, the navel (umbilicus) is regarded as one of the key places in the body. Moxibustion applied to the naval has been a popular treatment method since ancient times in China. (Image: via Wikimedia Commons)

Traditional Chinese medicine (TCM) believes that the navel (umbilicus or belly button) plays a significant role in treating patients. The acupuncture point in the center of the navel is called “shen que” (Spirit Gate), and it plays a key role in a variety of therapeutic treatments in TCM, including navel moxibustion.

In TCM, the shen que point is also considered to be the first human mouth and the focal point of all the meridians.

Today, moxibustion is widespread and used together with acupuncture and cupping for syndromes ranging from bronchial asthma to arthritis. It can also generally be used to promote healing and retain health. Many TCM practitioners and their patients report positive results.

In moxibustion, the leaves of the Chinese herb mugwort (Artemesia vulgaris or ai ye in Chinese) are dried and then burned. The herb in its dried state is called moxa and can either be rolled into balls and cones or bought commercially in very short or long rolls.

What is navel moxibustion?

The navel is the area located at the lower part of the torso and is what remains after the umbilical cord is cut, right after birth. In TCM, it is also referred to as the “golden point,” and the acupuncture point related to it is called shen que (Spirit Gate). The Chinese herb used for moxibustion is burned right above the navel during navel moxibustion.

The navel is densely populated by blood vessels and is considered to be an alternative place to administer medications to a patient because its absorption rate is higher than that of the stomach. This method, however, is considered dangerous in many Western countries, and it is thus hardly practiced.

Chinese medicine believes that drugs administered through the navel will quickly spread and affect the meridians and internal organs. Furthermore, administration through the navel is believed to be less of a burden on the gastrointestinal system compared to taking medication orally.

Clinical research has been done on moxibustion and its effect on Crohn’s Disease (CD). Moxa was used together with acupuncture. According to the study, moxibustion with acupuncture provided significant therapeutic benefits in patients with active CD beyond the placebo effect.

How does it feel?

It is common to hear from patients that they sensed a sudden flow of warmth that radiated along a specific pathway of their body, oftentimes corresponding to the meridian being treated. TCM doctors consider this a good sign, as it indicates the arrival of the qi and the opening of the channel in question.

In China, navel moxibustion is commonly used to promote digestion and demote abdominal pain, diarrhea, insomnia, and other dysfunctions.