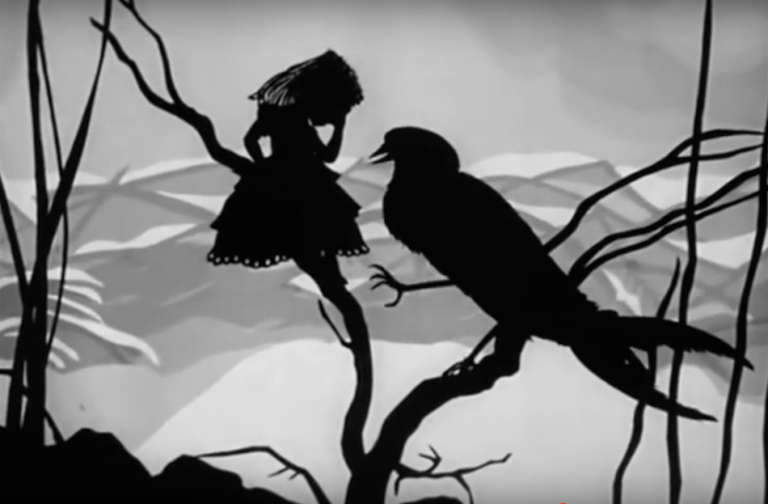 Charlotte “Lotte” Reiniger was a film director, an animator, and a trailblazer for women in the film industry. Lotte Reiniger was born in Berlin, Germany, in 1899, and throughout her life, she made over 40 films. She also made one of the world’s first animated features, The Adventures of Prince Achmed.

Her films are most famously known for their painstaking silhouette cutouts, all made by hand, with beautiful bits of movement and detailed gestures that convey charm and emotion. Reiniger pioneered this technique. She died in 1981, just after her 82nd birthday.

Thumbelina is an enchanting short film she made in 1954, around 30 years into her career. The film has been scored with new music and is just so delicate and sweet. Thumbelina is a literary fairy tale written by Danish author Hans Christian Andersen.

As a child, Reiniger fell in love with the Chinese art of silhouette puppetry. She even built her own puppet theater and would constantly perform for family and friends.

As a young woman, she worked for Wegener, creating the silhouettes for his intertitles. She had her big break in The Pied Piper of Hamelin, animating the rats. The job was a success and Reigner recalls:

“Those rats really moved as erratically as you would expect panicky rats would, and they followed the Piper all right.”

This success allowed her to gain entry into an experimental animation and short film studio, Institut für Kulturforschung (Institute for Cultural Research). Reigner met her (eventually to be) husband and creative partner Carl Koch there, along with artists Bertolt Brecht, Berthold Bartosch, and Hans Cürlis.

In this clip below, you can see what it takes for Reiniger to make a silhouette film. In her animation studio at home, she explains:

“First of all, select an idea that you like to do very much, ’cause the work takes a very long time…”

She was approached by Louis Hagen in 1923 to make a feature-length animation. Reiniger was quoted from Sight and Sound Magazine as having reservations in the beginning:

“We had to think twice. This was a never heard of thing. Animated films were supposed to make people roar with laughter, and nobody had dared to entertain an audience with them for more than ten minutes. Everybody to whom we talked in the industry about the proposition was horrified.”

But she did go ahead with the offer, and from 1923-1926 she created The Adventures of Prince Achmed, which today is the oldest surviving animated feature film.

Here are some visual highlights from Reiniger’s The Adventures of Prince Achmed:

During the 1930s, Reiniger and her husband fled from Germany to get away from Hitler. They spent a lot of time moving around until after the war, finally settling in London. This allowed  Reiniger’s career to flourish again.

In 1953, Louis Hagen, who had spent many years in a concentration camp, came to London as a refugee and set up a production house called Primrose Productions. Reiniger made over a dozen films there, which kept her career going for another 10 years.

The last film she made was in 1979 called The Rose and the Ring, written by William Makepeace Thackeray.

She died just after her 82nd birthday in Germany. She is remembered as a pioneer in her field who made groundbreaking silhouette films based on fairy tales, modeled after ancient techniques, full of intricate detail and beauty. If you haven’t already seen any of her films, I suggest you start to explore her work. Her filmography can be found here.