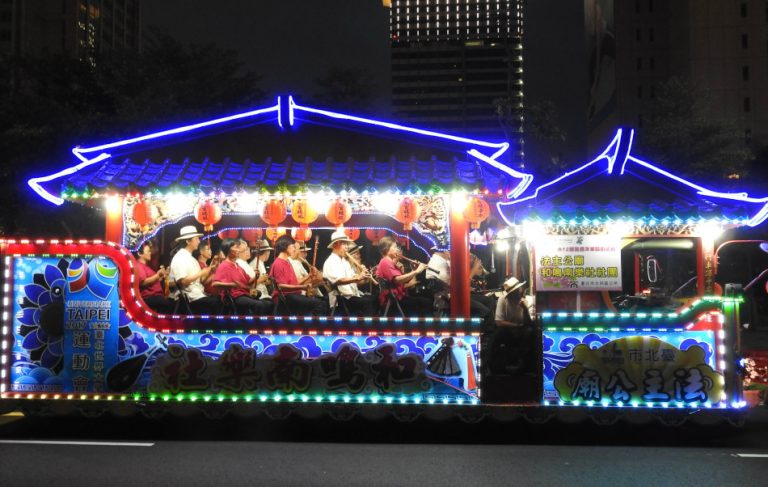 A float in the parade leading up to the 2017 Summer Universiade in Taipei, Taiwan. (Image: Billy Shyu/Nspirement)

Hosted by Taiwan for the first time, the 2017 Summer Universiade — with the theme of “For You, For Youth” — was held in Taipei on August 19-30. Some 11,000 athletes and support staff from 141 countries attended the sporting extravaganza, which ended on August 30.

Please watch the following video of the grand parade marking the beginning of the 2017 Summer Universiade in Taiwan:

Taiwan’s largest international sporting event opened with a grand parade in downtown Taipei on August 12. It drew some 30,000 people, 1,100 vehicles, and dozens of floats to welcome both athletes and visitors from around the world to the event.

Addressing the crowd in front of the Civic Plaza, Taipei City Mayor Ko Wen-je stressed that the Universiade is a great opportunity to raise Taiwan’s international profile, and let the world witness the friendliness and compassion of its citizens.

Among the 400 teams participating in the parade were representatives of Taipei City’s 12 administrative district offices, regular citizens, various civic organizations, school clubs, temples, as well as college students and families.

Led by the Taipei First Girls’ High School Marching Band and groups holding the national flag of the Republic of China (Taiwan) and flags of Universiade and International University Sports Federation (FISU), the long procession moved from the Taiwan Air Force Innovation Base and past the city’s business center to the main stage in front the Taipei City Hall close to the Taipei 101 Tower, which is one of the tallest buildings in the world.

In addition to performing at the main stage at the Civic Plaza, many groups also provided an array of performances featuring traditional Taiwanese culture along the parade route to entertain spectators. Among them was the Tian Guo Marching Band, composed of some 200 Falun Gong practitioners donning Tang Dynasty-style costumes. The marching band’s inspiring and uplifting performance received a warmhearted response all along the route.

Another feature of the event was the participation of many temples and other religious groups, which created a religious carnival atmosphere during the parade. It made for a cheerful and colorful procession through the heart of Taipei.

Also known as the World University Games, the Universiade is an international sporting and cultural festival held biennially in a different city worldwide. The 29th Universiade is the largest international sporting event ever staged in Taiwan. It attracted some 7,700 student athletes from 141 countries. Participants competed in 21 sporting events at 38 venues in cities across Taiwan.