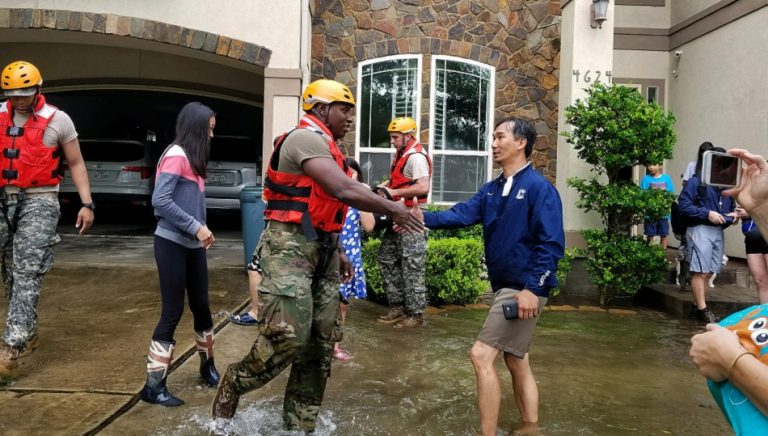 They say everything is big in Texas. This must include big hearts as well. Examples of heroism and kindness were seen aplenty as Texans came together in the southeast of the Lone Star state to help those affected by Hurricane Harvey, the worst rainfall disaster in U.S. history.

The death toll of the disaster has risen to 46 and some 325,000 people were affected by the Category 4 hurricane that first hit Aug. 25.

The country’s emergency services were overwhelmed by the scale of the crisis, and it needed all citizens to get involved to help out.

As with many times of disaster, it brought out the best in people helping their fellow citizens.

Emergency teams and citizens used their own boats to rescue people and in many cases, their pets trapped in flooded homes, and helped them get to dry shelter.

People unaffected by the flooding even came from other parts of Texas to help.

Animals also weren’t forgotten as you can see in the below video Tweet:

These people saving animals during Hurricane #Harvey are heroes. 💙 pic.twitter.com/HjbonE476W

Examples of the generosity shown are too many to count, but all of them were reminders of what really matters in what has recently been a divided nation.

“Politics can talk about race and creed and religion and all that stuff all day long, but here’s proof right here that none of that matters,” said one man getting help at a shelter in the below NBC News video.

One of the most notable acts of kindness was that shown by furniture businessman Jim McIngvale — known as “Mattress Mack.” McIngvale opened the doors to two of his massive showrooms in Houston so they could become shelters for those affected by flooding.

He managed to shelter some 1,000 flood-affected people. It was also a crash pad for National Guard personnel who were helping during the flood.

“I’m part capitalist and part social worker, and this is what I like to do,” McIngvale told CBS This Morning in the video at the very top of this post.

I'm a Brit that lived in the USA for 8 years. It's this kind of guy that makes America great. Awesome story. #mattressmack #hustonstrong pic.twitter.com/CLyDSSkOFC

People were supplied with food – breakfast, lunch, and dinner. McIngvale also sent out his trucks to help rescue those stranded by the flooding. It was also a crash pad for National Guard personnel helping with the recovery.

“We can afford that, what we can’t afford is to cause these people to give up hope, we gotta give them hope. This is what my parents would have done,” said the 66-year-old.

"Black, white, brown, white, these are my people. I gotta help my people" – Mattress Mack, at times in tears pic.twitter.com/pX6uFaUWNB

Roberta Lee was one of those who took shelter in his showroom.

“For him to open his door and say: ‘If you are affected by the flood to come in,’ and I mean you had people wet, you had people dirty. Who does that? You have to see it to believe it. It’s real… He has a heart of gold,” said Lee told CBS.

Our GF N FWRY & GF Grand PKWY stores are open for those in need. If you can safely join us, we invite you for shelter and food. God Bless. pic.twitter.com/IHHgjKmjMY

In 2005, McIngvale housed 200 people affected by the Katrina disaster.

There is an online petition seeking to make Aug. 26 “Mattress Mack Day.” More than 180,000 people have so far signed the petition on Change.org.

McIngvale was also been known as a businessman with a big heart.  Now he is a living legend, just like southern hospitality.

Watch this NBC News for more on how Texans are picking up the pieces after Harvey: