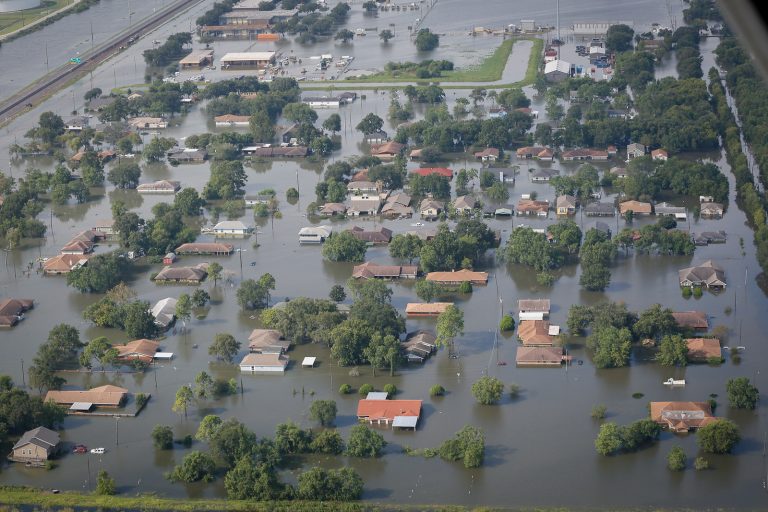 What the Houston flood catastrophe tells us about the way we build cities in the age of climate change goes far beyond Texas. (Image: via U.S. Air National Guard photo by Staff Sgt. Daniel J. Martinez via Flickr)

The amount of rain that Hurricane Harvey recently (end of August 2017) pored down on Houston was phenomenal. But what this Hurricane Harvey catastrophe tells us about the way we build cities in the age of climate change goes far beyond Texas.

The accumulation of extreme precipitation and floods is turning into a new trend, a circumstance that might be unique for Huston, but seems to be a concern for all cities around the globe.

During floods, we can’t lean back on our old certainties anymore. There are three points that make us humans responsible for the effects that such extreme climate phenomena’s will have on us.

There are 3 main reasons behind the Hurricane Harvey catastrophe

The first point is global, the second one is local, and the third point is that we underestimate the first two. The following three points will make it clear why we should not underestimate the effects that the coming climate and its changes may have on us.

1. The global reason for the Hurricane Harvey catastrophe

Whether global warming is man-made or not, it is happening, and wherever we fail to read the signs “written in the clouds,” or more importantly take them seriously, we pay the price, like in Houston.

The climate is changing all over the world. According to a quote about global warming on the NASA website:

“Scientific evidence for warming of the climate system is unequivocal.” — Intergovernmental Panel on Climate Change

“The current warming trend is of particular significance because most of it is extremely likely (greater than 95 percent probability) to be the result of human activity since the mid-20th century and proceeding at a rate that is unprecedented over decades to millennia.”

NASA points toward global carbon emissions that trap certain heat-trapping rays within the Earth’s atmosphere, which over time results in an increase in global temperatures.

“The heat-trapping nature of carbon dioxide and other gases was demonstrated in the mid-19th century. Their ability to affect the transfer of infrared energy through the atmosphere is the scientific basis of many instruments flown by NASA,” says NASA.

2. The local reason for the Hurricane Harvey catastrophe

America’s fourth-largest city has a rapidly growing number of inhabitants. Unfortunately, its infrastructure, streets, and road trenches mainly are built in a way that makes Huston prone to flooding.

Much of the city is covered with concrete surfaces — concrete does not absorb water.

“A disaster involving a hurricane cannot happen unless people, infrastructure, and communities are vulnerable to it,” says a quote from The Conversations’ article “Don’t blame climate change for the Hurricane Harvey disaster — blame society.”

An estimated 400 or more billion gallons (1.5 trillion liters) of water flooded down on the large Texas metropolis. With hardly anywhere to seep away, the enormous downfall of rain quickly turned into tearing floodsthat created this man-made hurricane Harvey catastrophe.

Huston’s infrastructure was just never laid out to accommodate large amounts of rain. While the odds of a flood this big in the area are estimated to lie somewhere close to 1:500, some critics believe that considering the changing climate and the signs inherent all over the world, measures could have been taken in advance that might have made the effects of Hurricane Harvey less dramatic.

Global climate change is no secret and signs of it can be seen everywhere. In many places, winter begins later and summer doesn’t really start when it used to.

From Asia to Africa and the US, @WMO sums up how #climate extremes are impacting the world right now https://t.co/S6pvBiZQYq #climatechange pic.twitter.com/hyfUlAWz5l

We also know that climate change is making increased downpours more likely. In Houston alone, over the past decade, downpours have become 167 percent more frequent and according to some analytical predictions, Harvey might not be the last we see of increased downpours, according to Andrea Thompson’s “great rundown at Climate Central,” which goes into more detail on this.

The big question now is whether enough is being done to adjust city infrastructures and landscapes to accommodate the prevailing risk of possible future impacts due to natural disasters.

“Some researchers believe there is no climate signal discernible at all yet, according to Roger Pielke Jr.’s long, lonely crusade on this question. Others disagree, and the battle wages on, but that battle has always struck me as less important than its participants take it to be”, says David Roberts in “Climate change did not ‘cause’ Harvey, but it’s a huge part of the story,” a Vox article that goes into more detail on the debate about Harvey and climate change.

While the hardships of rebuilding and recovering after a devastating catastrophe can be severe, they also bring a very fortunate blessing to those who are willing to allow insight instead of remorse guide their judgement. Just look at Japan; after each disaster, Japan rebuilds bigger and better, learning from their past mistakes.

What insights can Houston gain from the hurricane Harvey Catastrophe, and how can these help us all in the future?