The Ghost Festival Celebrations in Taiwan 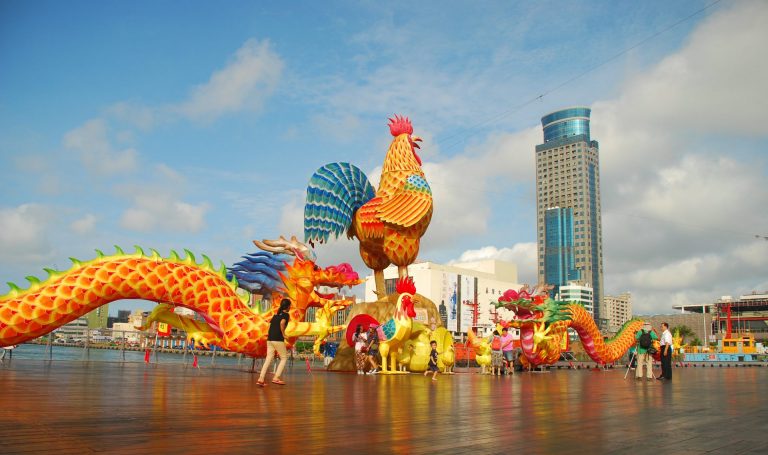 The Ghost Festival is celebrated in the seventh lunar month, which falls between August 22 and September 19 this year, is a very important month for people living in Taiwan because it is the so-called “Ghost Month.” Legend has it that the gates of hell are opened on the first day of the lunar month to allow wandering ghosts and spirits of the nether realm, including those of their ancestors and other deceased loved ones, to enter into the mortal world to enjoy sacrificial offerings until the end of the month. To honor this, people celebrate the Ghost Festival.

Please watch the following video of the spectacular Ghost Festival celebrations in Keelung:

To celebrate, households prepare various sacrificial items at a temple or on temporary altars set up in front of their homes for ancestors, deceased loved ones, or wandering ghosts. This is the so-called Chung Yuan Pudu (中元普度), or General Salvation. The festive activities culminate on the 15th day of the lunar month, which is known as the Chung Yuan Festival (中元節).

One of the highlights of the celebrations in Keelung is a grand parade held on the evening of the 14th day, and just before the release of water lanterns (放水燈) by each clan association. The grand parade included dozens of colorful theme-based floats sponsored by the clan associations and various public and civic organizations.

The long procession wound its way through the main streets of downtown Keelung and attracted numerous locals and visitors from outside Keelung.

In addition to a variety of cultural and folklore performances, one of the most striking scenes of the parade was a performance by Taiwan’s Falun Dafa Association. It included a stunning float followed by the Tian Guo Marching Band, composed of some 200 practitioners, and the Waist Drum Troupe, comprising 70 members. Members also gave away colorful paper-folded lotus flowers to spectators all along the parade route.

Another highlight of the Ghost Festival is the Grand Pudu (General Salvation), held in front of the richly decorated Main Altar (Zhupu Altar,主普壇) at the Keelung Zhong Zheng Park on the afternoon of the 15th day of the lunar month. Local residents prepared offerings and carried them to the Main Altar to join in the rituals conducted by a Buddhist master.

In the past, local residents used to prepare sacrificial pigs, goats, chicken, ducks, and fish for offerings. However, due to increased awareness of animal welfare, people craft animals as sacrifices nowadays.