Meet the Tame Tiger Cub Breast-Fed by a Sow 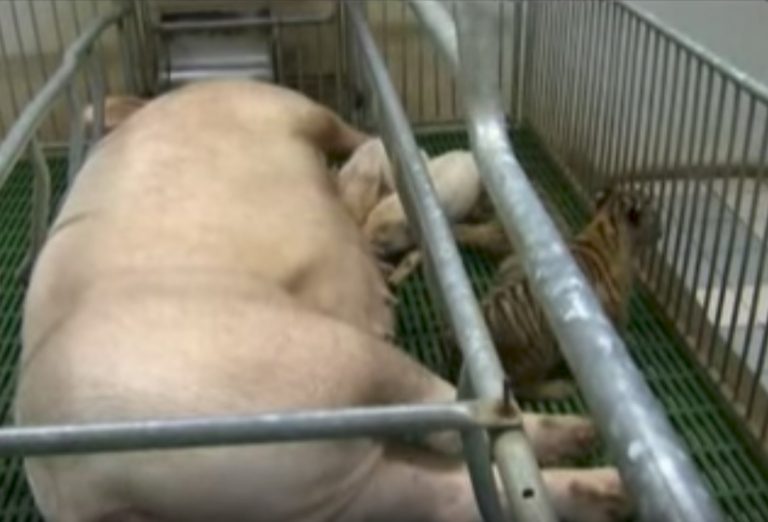 In a Thailand zoo, there was a little tiger born that, just after birth, became an orphan. (Image: nspirement)

The influence mothers can have on their young ones is quite profound. This does not only apply to human beings, but as the following story shows, it applies to animals like this tiger cub as well.

This is how the story began.

In a Thailand zoo, there was a little tiger born that, just after birth, became an orphan. His mother died during his delivery.

What was the zoo staff to do, with no other tiger mother around who could breastfeed the little tiger cub?

Elsewhere, a sow had also just successfully given birth to several piglets.

When the zoo staff saw how the little piglets were joyfully feeding on their mother’s breasts, the staff got an idea. “Why not have the sow adopt the tiger cub.”

Putting words into action, that’s how a sow became the new mother to a little tiger cub.

Tiger cub suckles from a sow

Watching the little piglets drink the sow’s fragrant milk, it was not long before the little tiger cub did the same.

The little tiger grew fast. It was not long before it had grown to match the size of the sow. Regardless of its size, the tiger cub still sleeps gently with the sow each day.

A peculiar thing has taken place during the time the little tiger has grown up with the sow and its piglet brethren. The sow’s habits have rubbed off on the tiger. It seems the king of the jungle has taken on the ways of a pig.

Experts on the matter claim that it’s normal for the cub to act like the sow, as this is a natural result of the cub being fed and raised by the sow, which is now, so to speak, the tiger’s mother. Thus, adapting its mother’s ways and taking on its mother’s behavior seems like the most normal thing in the world.