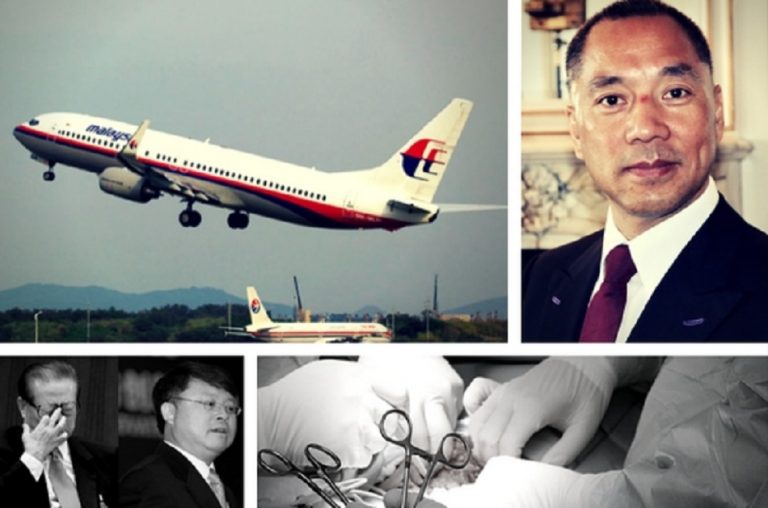 Asylum seeking Chinese billionaire Guo Wengui has said the disappearance of Malaysia Airlines flight MH370 three years ago was done to get rid of people knowledgeable of organ harvesting cases in a Nanjing hospital that involved the powerful son of former Communist Party chairman Jiang Zemin.

On September 6, Guo said the disappearance of flight MH370 from Kuala Lumpur to Beijing on March 8, 2014, was related to high-level infighting in the Chinese Communist Party (CCP). Nspirement is unable to verify such claims and Guo has offered no proof.

All 239 people on board flight MH370 were presumably killed. Of that number, 153 were Chinese. The fate of the aircraft is not officially known.

The 50-year-old said the disappearance of flight MH370 was linked to covering up a series of kidney transplant operations that Jiang Zemin’s eldest son, Jiang Mianheng, had between 2004 and 2008.

The transplant operations were carried out at the Nanjing Regional Military General Hospital where five people, so-called donors, were killed to supply the kidneys, Guo said.

The New York-based real estate tycoon made the unverified claims in September as part of his ongoing expose — via Twitter and YouTube — of high-level corruption in the CCP.

According to Guo, these transplants were performed by a kidney transplant expert, Li Leishi, deputy director of the hospital. Guo pointed out that Li jumped off a building to his death in April 2010.

The exiled billionaire questioned the death of another transplant surgeon, Professor Li Baochun, who jumped from the 12th floor of the Shanghai No. 2 Military Medical University Shanghai Hospital building on May 4, 2007.

Meng has been described as being a part of the “Shanghai gang,” a group of communist officials who came to prominence because of their ties with former Party leader Jiang Zemin.

While Jiang Zemin ceased being the leader of the Communist Party in 2002, and then two years later stepped down from his position as chairman of the Central Military Commission in 2004, he managed to hold immense sway in the Party due to his network of cronies he installed during his reign.

In 1999, it was Jiang Zemin who launched the persecution of Falun Gong practitioners, who are now believed to be the main source of the state-sanctioned but ‘secret’ organ harvesting operations in China, a country with no real functioning organ donation system.

Organ harvesting in China in 2016: This is the brutal reality https://t.co/sPLXEMyQ7G Support CCP = support brutality

Fled in fear to Malaysia

Guo said that the families and insiders who were linked to the transplants for Jiang Mianheng, along with family members of Meng, fled in fear to Malaysia. Chinese security persuaded them to return to China, Guo said, adding that they were on board the Malaysia Airlines aircraft that disappeared.

The exiled billionaire said that Meng and the Political and Legal Affairs Committee committed mass murder to silence them to cover up the truth of the transplants and the organ harvesting for Jiang Mianheng and Meng’s family.

This is the truth on the disappearance of the Malaysia Airlines flight, said Guo.

In an earlier video published on September 1, Guo described the relationship that Jiang Mianheng had with Meng, and how it was forged through the transplants.

“When Mr. Jiang Mianheng underwent his handful of kidney transplants from 2004 to 2008 in a hospital in Nanjing, it was all organized behind-the-scenes, a secret selection of people and kidneys, it was all undertaken by Meng Jianzhu and Shanghai Politics and Law Committee leaders and a few military leaders working together,” said Guo in the video (translated by China Digital Times) that was made in his $67 million Manhattan apartment.

Apart from the claims about MH370, Gou has made a number of dramatic statements in the past six months, including that there are some 25,000 Chinese spies working in the U.S. and details about the hidden offshore wealth of certain high-level Chinese officials.

Gou made his fortune as a Beijing property developer and was considered well connected with the Party elite, especially Ma Jian, a former vice Minister of State Security who is currently detained and facing prosecution for corruption.

While in custody, Ma has reputedly said he assisted Guo’s business interests through the misuse of state power. Guo said that anything Ma has said during detention was done under duress.

China watchers say that Guo is also suspected of being a money launderer for top Chinese officials.

The Chinese government has frozen some $70 billion worth of Guo’s assets in China and has imprisoned some of his family members and employees, reports the Washington Free Beacon.

Fearing for his life, Guo made an application for political asylum in the U.S. on September 6.

In the lead-up to the 19th National Congress of the Communist Party of China beginning on October 18, Guo has been revealing more information about corruption at the highest of levels in the Chinese government.

For more on the organ harvesting issue, watch this episode of China Uncensored: