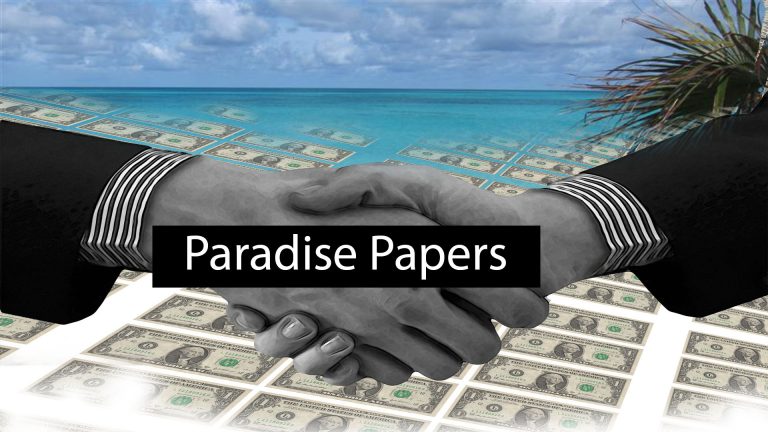 The Paradise Papers- Having an offshore account is generally not illegal. However, the capability to stealth the source of the money makes offshore banking very attractive to those who want to operate in the shadows. (Image: Hermann Rohr via Nspirement)

Just recently, another episode of leaked documents, coined the Paradise Papers, has emerged.

The song being sung bears a familiar tune: Some very wealthy and influential individuals, also known as “one percenters,” are using profound methods to evade taxes.

According to a report by the International Consortium of Investigative Journalists (ICIJ), the newly leaked documents show how deeply the offshore financial system is interwoven with the playing fields of politicians, private wealth, and corporate giants.

Among the ranks of those allegedly interconnected with the so-called Paradise Papers are individuals like the chief fundraiser for Canadian Prime Minister Justin Truder, the queen of England, and over 120 politicians from around the globe.

Corporations like Apple, Nike, Uber, and other large companies are also said to be in on the latest heist, an ingenuity of tax evasion.

The newly leaked Paradise Papers apparently reveal how some of the wealthiest individuals, politicians, and corporations hide their money from the grinding wheel of the IRS and its foreign brethren.

Some strings of the web are said to lead to current U.S. President Trump’s commerce secretary and private equity giant Wilbur Ross, who has made US$68 million profit in the past 3 years from doing business with a Russian energy company, allegedly co-owned by the son-in-law of Russian President Vladimir Putin.

According to Brooke Harrington, a professor at the Copenhagen Business School, in an interview with ICIJ: “There is this small group of people who are not equally subject to the laws as the rest of us, and that’s on purpose.”

The practice of tax havens, a place to stash your cash outside of the reach of those who will charge you taxes, has for the longest time been shrouded in secrecy. In fact, the methods by which these offshore locales create and oversee companies are so profound that common law could not touch them.

Technically, the offshore part is not illegal

“There’s nothing illegal about establishing an offshore account unless you do it with the intent of tax evasion. The Foreign Account Tax Compliance Act (FATCA) requires banks around the world to report balances and any activity of American citizens to the IRS or face fines,” according to Investopedia.

The illegal part comes into play when the account-holding institution does not report the identities and certain financial information about their clients to those foreign institutions that require it to charge domestic taxes on the money being diverted to an offshore account.

So why all the noise about tax havens?

Having an offshore account is generally not illegal. However, the capability to stealth the source of the money makes offshore banking very attractive to money launderers, drug traffickers, and others who want to operate in the dark, in the grey shadow cast by the light of the law against the face of its own loopholes.

“There is this small group of people who are not equally subject to the laws as the rest of us, and that’s on purpose. They “live the dream,” enjoying “the benefits of society without being subject to any of its constraints,” Harrington said.

These latest revealing documents build on the insights previously gained from the so-called Panama Papers, which in 2016 were “investigated by ICIJ and its media partners.”

The recently surfaced documents — the Paradise Papers — are said to expose a yet unexplored territory or “island havens,” like the Cayman Islands and Bermuda, among others.

Decades worth of corporate records reveal the relationship between the offshore law firm Appleby and the corporate services provider Estera. Until 2016, when it became independent, Estera operated under Appleby offering corporate services.

Appleby has enjoyed the rank of a “white-shoe” offshore law firm and has a 100-year reputation of “discretion and expensive client monitoring.”

Among Appleby’s clients are at least 31,000 U.S. citizens or individuals with a U.S. address. This number surpassed any other country that Appleby counts as its clients, among which are clients from the United Kingdom, China, and Canada, which all belong to ”its biggest source of business.”

The strings that tie the pieces together

Appleby is a member of the “Offshore Magic Circle,” which is said to be an informal clique of the world’s leading offshore law practices. The firm was founded on “Bermuda and has offices in Hong Kong, Shanghai, the British Virgin Islands, the Cayman Islands, and other offshore centers”.

While Appleby has quite a good public image, the emergence of the  Paradise Papers show a company “that has (not only) provided services to risky clients from Iran, Russia, and Lybia, but also failed government audits, which found holes in its anti-money-laundering procedures.” According to the Paradise Papers, Appleby has been fined in secret by the Bermuda financial regulator.

While Appleby didn’t respond directly to the questions asked by ICIJ, it released an online statement saying it is “satisfied that there is no evidence of any wrongdoing.”

The Paradise Papers in a nutshell

The leaks reveal splinters of spy planes bought by the United Arab Emirates, “the Barbados explosives company of the Canadian engineer who tried to build a ‘super weapon’ for the once Iraqi dictator Saddam Hussein.” It also contains trails that lead to the influential Mexican priest who “founded the Catholic religious order called the Legionaries of Christ and who was accused of child sexual abuse.”

Queen Elisabeth II has invested millions of dollars in medical and consumer loan companies, according to Appleby’s files.

The records show that since 2007, the Queen’s private estate invested in a Cayman Islands fund that again invested in a private equity company that was later criticized by consumer watchdogs and a number of parliamentarians. The private equity company would sell household goods to financially burdened Brits who entered into payment plans that had interest rates as high as 99.9 percent.

The list of royals and politicians tied to the Paradise Papers include more than just the Queen of England.

Among the newly disclosed offshore ties are those of Queen Noor of Jordan, Uganda’s Minister of Foreign Affairs, a former U.N. General Assembly President, and many others.

“The leaked files contain more than a thousand records from Antigua and Barbuda, a Caribbean country that provides no online corporate information and more than 600,000 documents from the online registry of Barbados, which does not list shareholders or directors.”