Earthquakes at Fracking Sites May Indicate Larger Tremors to Come 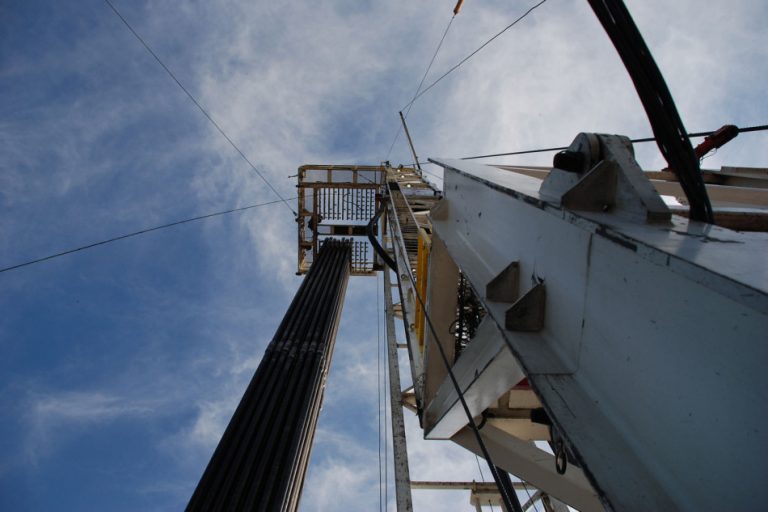 A drill rig at the Fayetteville Shale gas play in Arkansas. The area was shaken by earthquakes in 2010 and 2011 following injections of wastewater from natural gas operations into deep underground wells. (Image: Bill Cunningham via USGS)

Researchers have developed a new technique that can be used to monitor the seismic activities around fracking operations that may help to reduce the likelihood of larger and potentially damaging earthquakes at fracking sites from occurring.

The tiny tremors, which are caused by hydraulic fracturing of natural gas near the surface, may be an indication of the stressful conditions deep underground that could destabilize faults and trigger larger earthquakes.

Stanford geoscientists have developed a way of detecting the thousands of faint earthquakes at fracking sites that have been previously missed. Clara Yoon, the lead author of the study published in the Journal of Geophysical Research, said in a statement:

“In our study, you can actually see individual earthquakes occurring next to the section of a well that’s being fracked.”

“These small earthquakes may act like canaries in a coalmine.

“When they happen, they should be viewed as cautionary indicators of underground conditions that could lead to larger earthquakes.”

Citizens nearby an Arkansas natural gas field were rocked by a magnitude 4 earthquake; it was then followed by two larger aftershocks in February 2011.

Scientists said that the two larger aftershocks were caused by the injection of wastewater from fracking sites into deep underground wells, and not by fracking operations closer to the surface.

“These were some of the first earthquakes related to shale-gas development to draw national attention,” Ellsworth explained

Since the Arkansas earthquakes, Oklahoma, Texas, and other gas and oil-producing states have subsequently been rattled by earthquakes of a magnitude 4 and higher.

Yoon and her colleagues were able to conduct a retrospective analysis of seismic activity in Arkansas before the magnitude 4 event by using an advanced data-mining algorithm developed by the research team.

“We were interested in how the sequence that led to the magnitude 4 earthquake got started.

“We looked at the earliest period of seismic activity in 2010, from June 1 to September 1, when wastewater injection was just beginning.”

When the algorithm was used, it was discovered that there were more than 14,000 small, previously unreported earthquakes.

The researchers were able to show that most of the earthquakes were the direct result of fracking operations at 17 of the 53 production wells, after comparing the timing and location of the tremors with fluid-injection data that was provided by the state of Arkansas.

“That was a surprise, it had been thought, and we thought, that early earthquakes in this area were related to wastewater injection. But we found that the majority were caused by fracking.”

The earthquakes at fracking sites larger than expected

It was found that most of the earthquakes at fracking sites were larger and more persistent than expected, indicating potential trouble ahead. Earthquakes generated by fracking are usually no larger than magnitude 0, this equivalent to a milk carton hitting the floor after falling off a counter.

Even though most fracking-induced quakes occur near the well and dissipate quickly, some Arkansas earthquakes were located a distance from the wellbore and had continued weeks after the fracking operations had ended.

“We were particularly surprised by the size and persistence of the seismicity.

“When earthquakes during fracking operations are larger than expected and persist for weeks, it indicates a high level of stress in that area.

Ellsworth believes fracking near wastewater wells induced thousands of earthquakes that were too big and lasted too long; this indicates the stress conditions deeper down were primed to create the instability that triggered larger earthquakes

“We want to encourage continuous seismic monitoring before fracking operations start, while they’re in progress and after they’ve finished.

“The algorithm Clara developed offers an efficient, cost-effective method for getting more information out of existing data, so that in the future informed decisions can be made that reduce the chance of larger earthquakes from happening,” Beroza said.