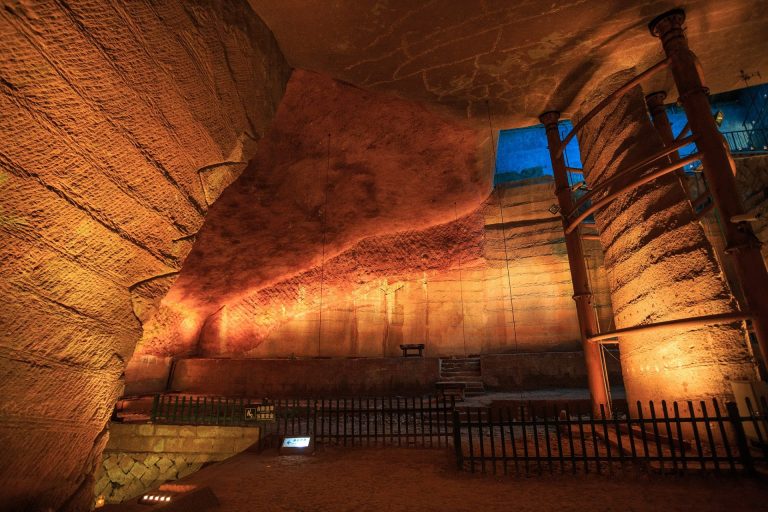 Scientists from around the world wonder how the caves have been able to keep their structural integrity for such a long time. And then there is the question of those tool marks. (By Zhangzhugang via wikimedia)

The Longyou Caves are a series of large artificial sandstone caverns located at Phoenix Hill, close to the village of Shiyan Beicun by the Qu River, Lingyou County, in China’s Zhejiang Province.

The caves were discovered by local “farmers who were pumping water out of five small pools on a rough-flat ground in 1992.”

These caves have become a mystery to many people trying to figure out how builders in the past were able to carve out these gigantic caverns and leave such unique tool marks on the surface of the walls.

The mysterious tool marks found in the Longyou Caves have baffled scientists since their discovery.

Scientists from around the world wonder how the caves have been able to keep their structural integrity for such a long time. And then there is the question of those tool marks.

What really makes these caves so mysterious and what is so special about their tool marks?

Modern-day high-tech machines dig away stone and grind down the walls and ceilings in mines and quarries.

But when we discover the same types of tool marks in caves that date back far beyond the time of any formally recorded technology capable of even remotely producing any similar marks on stone surfaces, most of us can’t help but scratch our heads.

How did people in remote history manage to carve out these caverns leaving tool marks that only find their likeness in modern mining operations?

The elephant in the room

Mainstream academia generally believes that people in the remote past were mostly simple dwellers and technologically primitive compared to people today.

According to academia, the evolution of technology went from primitive (in the past) to more advanced (today).

If what the tool marks in the caves suggest is confirmed, then the aforementioned assumption would be turned on its head.

While this hypothesis is an accepted theory in the field of academics, sites like the Lonyou Grotto in China put mainstream theories about what ancient people were capable of under scrutiny.

According to historians, the caves were created in the Qin Dynasty, 212 BCE; however, there is no historical record of their construction.

The caves were first discovered in 1992. So far, 24 caverns have been discovered, one of which has been transformed into a tourist attraction.

Mainstream historians believe that the Lingyou Caves were carved out of the massive stone by hand.

Each cave has a volume of several thousand cubic meters. Apparently, the ancient builders did it all by hand, with hammers and chisels.

But they didn’t chisel any simple way. The builders apparently chiseled the walls and ceilings in a way that left a uniform pattern.

When deriving conclusions within a framework of fixed notions and the chronology of events, it is difficult to ascribe perfectly aligned tool marks to the crude hammer and chisel work done by people of ancient times.

While it seems plausible to people who just consume information and do not critically think about what is said, those who do some research will find it hard to reason the facts surrounding the Longyou Caves using mainstream explanations.

To truly understand and properly analyze the caves and similar structures, you will need to be able to literally “think outside of the box.” You must be ready to constantly change your previous notions and reconsider prevailing hypotheses and theories in the light of new facts and artifacts surfacing.

It is, however, understandably difficult for any academic to throw away theories that they spent almost a decade studying and on which they have based their entire academic careers.

Let’s have a look at some interesting facts relating to the tool marks in the Longyou Caves.

Some believe the tool mark patterns are symbolic. The pattern covering the walls and cave ceilings is uniform.

Unverified rumors mention that among the caves discovered, there are seven “whose distribution pattern resembles that of the seven stars of the big dipper.”

Specialists from China, Japan, Poland, Singapore, and the U.S. have shown interest in further researching the many intriguing questions the caves conjure up.

Some of the most challenging questions

Asking questions is one part of solving a mystery; the other is being able to accept the answers you get. Are we willing to adapt what we believe we know to accommodate what we discover, even if the truth is outside the framework of the theories we use to explain history and human potential?