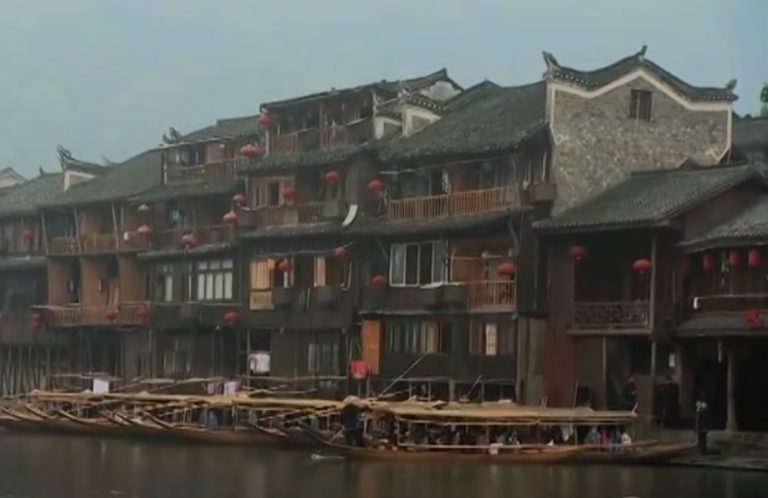 Ancient Fenghuang is an exceptionally well-preserved town and sits on the western border of Hunan Province. It is in an area with exceptional natural beauty where mountains, water, and blue skies prevail. Upon arrival, you will be captivated by its air of mystery, elegance, and primitive simplicity.

Located on the banks of the Tuojiang River (Tuojiang, 沱江) this old town has kept its original appearance from the Qing Dynasty 300 years ago. The bridges that sit over the water, along with the unique houses built on stilts, display a harmony that is often portrayed in traditional Chinese paintings.

Ancient Fenghuang is legendary for its unique ethnic languages (more than half the population belong to the Miao and Tujia ethnic minorities), customs, and arts, and also because of its distinctive Ming Dynasty and Qing Dynasty architecture. When the early morning mist arrives, it’s not hard to see why the claim of being the most beautiful town in the whole of China is more than justified.

Ancient Fenghuang can be divided into two parts. One is the old town, while the other one is the new town. The old one leans against hills and faces the crystal-clear Tuojiang River flowing through the city, and it is the main tourist area in the county. The new town is the normal residential area for local people.

“Fenghuang” is Chinese for “Phoenix,” the mythical bird of good fortune and longevity. It is said that the Phoenix set itself on fire when it was 500 years old. However, it was reborn from the ashes and is now immortal.

As for how the ancient town got its name, legend has it that two of these magnificent birds flew over it and found the town so beautiful they hovered there, reluctant to leave.

How to get to ancient Fenghuang

Ancient Fenghuang is located in the southwest of Hunan Province, bordering the cities of Huaihua to the southeast and Tongren (Guizhou) to the west. It is 37 km away from the nearest city, which is Jishou.

To travel to Ancient Fenghuang, you can take a train from the Shanghai South Railway station to Jishou, and then take a bus to the ancient town, or travel by plane from Guiyang (Guizhou Province) to the Tongren Fenghuang Airport.

Be aware of traps

From April to late October is the best time to visit; November to March is quite cold. There are a lot of choices for accommodation in Ancient Fenghuang, from well-equipped hotels to economic hostels.