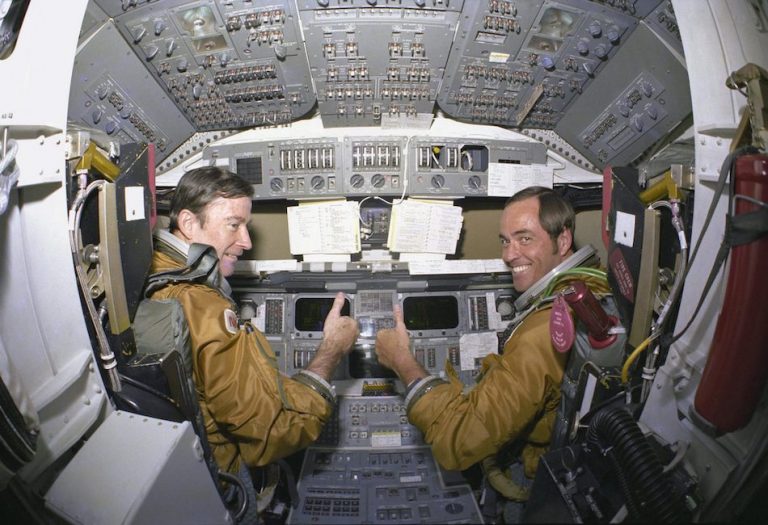 Commander John Young and pilot Robert Crippen take a break from their intensive training schedule to pose for pictures on the flight deck of the shuttle Columbia. (Image: Robert Sullivan, Flickr, CC0 1.0)

Astronaut John Young was among the first men to walk on the moon. He was NASA’s longest-serving astronaut and advocated for safety reforms after the 1986 space shuttle Challenger disaster.

Young died on January 5  at his home in Houston, Texas. He was 87 years old at the time of his death. NASA announced his death in a statement. The cause of death was related to pneumonia.

Young was a member of the first two-man space flight in 1965. He flew together with “Gus” Grissom aboard Gemini 3.

In 1972, Young commanded the Apollo 16 flight. He was one of only 12 astronauts to set foot on the moon.

Together with another astronaut, Charles Duke, he drove a lunar rover 16 miles across the lunar surface, collecting more than 200 pounds of soil samples and rocks.

Young was revered by his peers, especially for his decades of experience and humble manner. “If they have a hero, that hero is John Young. No man in the human spaceflight program is more respected,” fellow astronaut Robert L. Crippen said.

When he retired in 2004, then NASA administrator Sean O’Keefe said: “When you need a job done and you want it done right, John’s the person to go to.”

Following the Challenger explosion on Jan. 28, 1986, which killed seven crew members, Young exclaimed: “The astronauts were never made aware of such a potentially catastrophic technical problem.” Young, who was aboard a training aircraft, witnessed the disaster from the air.

In a 12-page memo, he wrote that “NASA management had compromised the astronauts’ safety” so that they could proceed with the launch. “There is only one driving reason that such a potentially dangerous system would ever be allowed to fly — launch-schedule pressure,” he wrote in his memo.

John Young remained an active astronaut into his early 70s. He was known to be outspoken when it came to matters of conscience.

Young was quoted saying in a 2000 interview.

Both NASA and many fans around the world are saddened by his death. NASA said in a statement, which the agency tweeted: “We’re saddened by the loss of astronaut John Young, who was 87.”