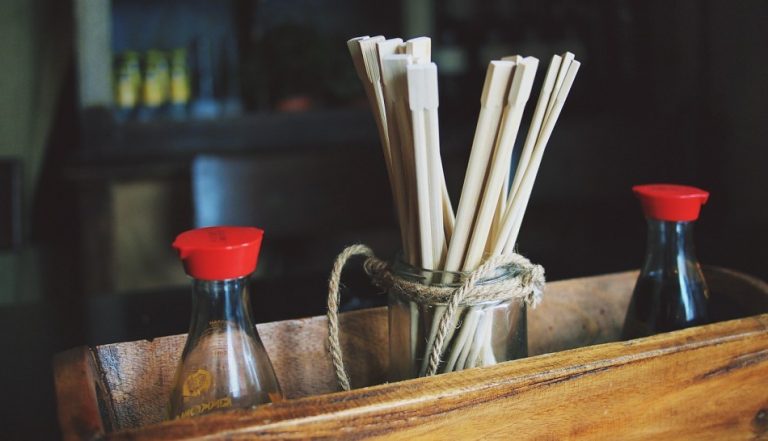 The most famous sauce in traditional Chinese cuisine is soy sauce. (Image: via pixabay)

The most famous sauce in traditional Chinese cuisine is soy sauce. It is made by fermenting soybeans and roasted cracked wheat with brine in wooden containers that are regularly opened to release gases and to stir the mixture.

After a year of slow fermentation, the resulting mash is pressed to expel soy sauce. The liquid is then cooked at a high temperature to halt the fermentation process.

In actuality, many soy sauces bought at a supermarket do not undergo this process, which is a traditional recipe that achieves a less salty, but more intense, flavor.

Soy sauce is called “jiang you” in China, and shoyu or tamari (non-wheat soy sauce) in Japan.

Unlike in China, in Japan, it is illegal to produce or import artificial soy sauce. So in Japan, soy sauce is only made in the traditional manner.

A modern Chinese invention — and produced in a process that is much faster and less expensive to produce than traditional soy sauce — artificial soy sauce is what is generally found in most grocery stories.

The artificial production process is far from the original version. It is produced without any fermentation, but instead by chemical hydrolysis starting from defatted soy flour, caramel color, corn syrup or other sweeteners, malt extract, and in some cases MSG.

To clarify, even though soy sauce goes by several names, they are not all the same. In fact, they are all different types and their production and ingredients are different.

A brief history of soy sauce

China has a huge amount of exotic and ancient spices and sauces in its cuisine, and soy sauce is one of them. Originating in China, it is one of the oldest in the world. Its historical origins date back to the Zhou Dynasty. (1600 B.C.–256 B.C.)

Back then, before it was used as a seasoning sauce, it was used to preserve meat because of its salty properties. The leftover liquid from this would be used advantageously as a condiment.

Legend has it that when Buddhism spread eastward to China, Buddhist monks also spread vegetarianism as a way of nourishment, and thus people looked for a substitute for the ancient seasoning sauces that had meat juices in them.

One of the substitutes created was a salty paste of fermented soybeans. Over time, this would be converted into soy sauce, now known the world over.

It first spread to other Asian countries like Japan, the Philippines, Malaysia, and Indonesia, eventually conquering all types of cuisines throughout the ancient East and West. Now, soy sauce is found in nearly every supermarket and in most kitchens all over the globe, whether Asian or not.

When buying soy sauce at the store, many wonder and question how to use it. Some may think it is used exclusively for Asian dishes, but this is no longer the case. Actually, many chefs and gourmands venture to use soy sauce in many of their traditional dishes, adding a touch of Eastern flair.

Soy sauce is an ideal complement to dishes with fried vegetables, rice, breaded items, stews, great for salad dressings, in dishes with poultry, beef, or pork, and even for fish — as a marinade or condiment.

Aside from being great at making dishes delicious, you can salt a dish with soy instead of regular salt. It’s great for people who suffer from high cholesterol, diabetes, or those who have a strict diet, such as celiac patients.

Although many sauces contain wheat, there are varieties like San-J’s tamari sauce that are gluten-free. And most companies produce low-salt versions. Check labels to be sure.

Soy sauce has the ability to turn a boring dish into one that is a delicacy to the palate, and is a whiz without limits when creating new flavors.

Remember that a few drops at the table are enough. Soy sauce or shoyu, which contains wheat, has a milder flavor than tamari and is ideal for cooking vegetables, soups, stews, and making salsa.

In contrast, tamari goes better with meat and fish dishes. Tamari is believed to have medicinal properties as well. In China, many people use it as a remedy by adding four or five drops to a cup of tea, especially Bancha tea.

It is used to combat physical fatigue, as it has a remineralizing effect. It also helps eliminate many harmful microorganisms that may be in food, and it enhances proper digestion and the absorption of nutrients.