Between Heaven and Earth: Jade Lake 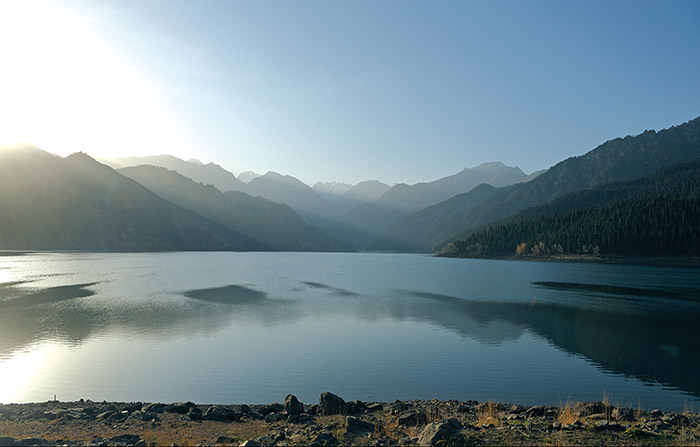 In Western culture, gods are given human qualities and they live in the human world. Olympus is where they reside in Greek mythology. Similarly, in Chinese culture, deities took abode at Mount Qunlun, or Kunlun. Many stories, especially Taoist, tell that Mount Qunlun was the place where Taoist cultivators practiced and became immortal.  Ancient Chinese regarded the mountain as “the source of the dragon’s meridian.”  The Heavens even left a divine pool on the mountain top known as “Yaochi,” or Jade Lake.

The dragon map of China

The land of China is named the giant dragon. Geographers hold that the shape of China is that of a dragon formed by many big and small world-famous mountain ranges, as well as a few of the most crucial life-breeding river systems in the world. All of these mountains and rivers originate from Mount Kunlun.  It bore China and even Asia, and China was born lying on its main meridian, which developed into branches, and branches into more branches. Just like the blood vessel network of the human body, it ultimately ran through the whole of greater China.

As the most sacred of China’s mountains, Mount Kunlun runs east from the Pamirs of Tajikistan along the border between Xinjiang and the Tibet autonomous regions to the Sino-Tibetan ranges in Qinghai Province. It spans 2,500 km in length and 130-200 km in width, totaling an approximate surface area of 500,000 square km, and holds an average altitude of 5,500-6,000 meters.

The exact sacred location of Mount Kunlun, where deities cultivated according to legends, still remains a mystery today. According to ancient Chinese literature, Mount Qunlun was more than 10,000 miles in height and covered by a layer of celestial light.

Where is Jade Lake?

A legend figure, the Queen Mother of the West was closely tied to Jade Lake. Living by it, she was the most ancient goddess for the Chinese. Tieguai Li, one of the Eight Immortals, was believed to have become immortal only by following her guidance.

Great poet Li Shangyin of the late Tang Dynasty was renowned for the imagist quality of his poetry. His writing to recap the legend and story of Jade Lake aroused fanciful thoughts about the celestial place from numerous scholars and intellectuals of his time. The poem goes like this:

“The Queen Mother of the West looks out through the open window. The song composed by King Mu of the Zhou Dynasty for his trip to Huangzhu drifts in the air and saddens the heart.

King Mu’s steed-drawn carriage can travel 30,000 miles a day. Why doesn’t he come and visit again?”

According to the legend, more than 3,000 years ago, King Mu once rode on his carriage drawn by eight extraordinarily fine steeds that could travel 30,000 miles a day to pay his visit to the Queen Mother of the West at the far away Jade Lake.

The Queen Mother, as the chief of the Western region, stood and waited by the lake to receive the respectful guest. Grand feasts and ceremonies were held to celebrate his visit. Seeing the grand view of the lake like a mirror in the air and its extension into the distance, the king was impressed. He tremendously enjoyed the trip. When they parted, he promised to return three years later. However, the promise was never fulfilled!  As dreamy and juicy as the story is, however, none of the scriptures on record concretely pinpointed the location of Jade Lake.

According to historical records, the legendary Jade Lake should be the Black Sea, which is the source of the Kunlun River. Located at a high altitude on a natural plateau, the lake maintains a mysterious veil.

However, nowadays people are keen to treat the Heavenly Lake of Tianshan in Xinjiang, Northwest China, as Jade Lake because the ancient name for this particular lake was also called Jade Lake. It is an alpine drift lake shaped in the Quaternary Glacial period and located 97 km away from Urumqi.

Watch this video of the Heavenly Lake in Xinjiang China:

Visitors can enjoy the stunning beauty of the glaciers, alpine lakes, and a steep natural scenic belt in the Heavenly Lake national reserve area.  With stories of the Queen Mother of the West as the backdrop, the dreamy mirror images of the mountains, unpredictable playful clouds, line after line of fir trees, clear waters, and blue skies attract keen nature lovers from all over the world to come and drink in its surreal beauty.

One may opt to come to Heavenly Lake for a pilgrimage to the Queen Mother of the West, but only the heavens know if she has ever been there!