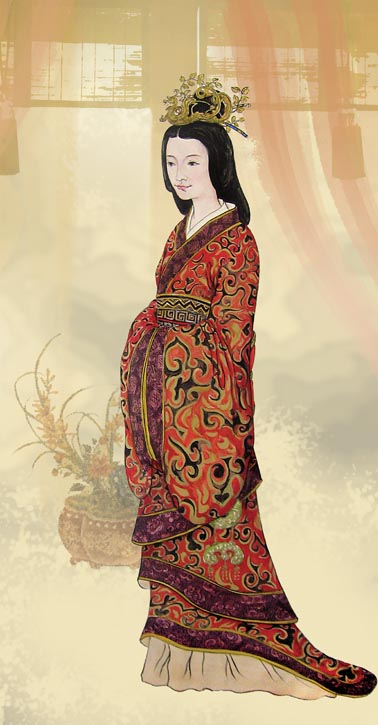 Yin Lihua from Nanyang (A.D. 5-64) was empress of the Eastern Han Dynasty. (Image: Courtesy of Taste of Life)

Yin Lihua from Nanyang (A.D. 5-64) was the empress of the Eastern Han Dynasty. She was a descendant of Guan Zhong, famed prime minister of the State of Qi during the Spring and Autumn Period.

As graceful as a cloud, as gentle as a melody, ancient Chinese noblewomen were like water — nurturing to all living things. This royal female archetype is a well-spring in traditional Chinese culture.

They were as serene and noble as the orchid. Their manners and inner beauty inspired millions of people. They were gracious, humble, respectful, and reverent. They were responsible for bringing up children and assisting kings. Their delicate physical bodies belied a strength so great it helped shape the history of China.

According to historical records, Empress Yin Lihua was benevolent and devoted. Full of compassion and love, she was remembered throughout time as a virtuous wife and excellent empress.

Yin Lihua was not the first empress to her husband

Yin Lihua was not the first empress to her husband Liu Xiu. Shortly after he reunified the whole of China and rose to the seat of power in A.D. 36, Emperor Liu found himself with a new dynasty to rule and no empress with which to rule it. Lady Guo Shentong, Liu’s second wife through political alliance, experienced many battles and hardships with him, and became pregnant with his first child. According to custom, she should have been the appropriate empress.

However, Yin Lihua, his first wife, was his sweetheart. He wanted to give the title to Yin Lihua unconditionally. When Lady Lihua heard this, she said:

“Companions in adversity should not be forgotten. Besides, Lady Guo is bearing your child. I will not take the empress position.”

Thus, she persistently declined the offer. Yin Lihua humbly and respectfully let go of the title of empress, a life-long dream of many ladies. She was named Imperial Consort instead. The Emperor tried to reward Yin Lihua’s magnanimity with jewelry, but she declined this also, saying:

“The nation has just been stabilized; many things still need to be done. Wouldn’t having so much jewelry be extravagant?”

Seventeen years later, Emperor Liu deposed the first Empress Guo for her poor show of character and made his first love, Lady Lihua, empress after all.

Being an empress now, Yin Lihua still remained humble and respectful. She embraced the deposed Empress Guo with compassion. Even after Guo slandered her several times, Yin Lihua did not punish her nor insult her. On the contrary, she pleaded for the emperor to be lenient with her.

Empress Lihua treated the former empress’s sons with love and care. She often told her children and grandchildren to respect the former empress as their own mother or grandmother. In large part due to Yin Lihua’s character and behavior, the royal family maintained harmony throughout the reign of the Eastern Han Dynasty. The princes, 10 in all, did not attempt to assassinate one another for access to the throne, which occurred so frequently in other courts.

After death, Empress Lihua was buried together with her husband. Yin Lihua’s humility and other merits won the love of a great emperor and taught others what a happy marriage in the sophisticated political world can look like. Her virtues are still inspiring generations of leaders and spouses.