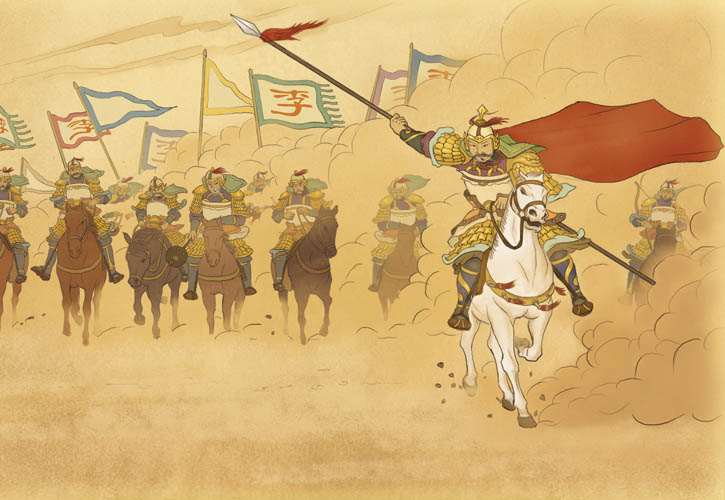 In A.D. 629, the Tang emperor dispatched a force of over 100,000 soldiers to eliminate the northern threat posed by the Eastern Tujue. (Image: Mu Chuan/Taste of Life)

The Chinese classic The Art of War thus defines a great general: “… the skillful fighter puts himself into a position that makes defeat impossible, and does not miss the moment for defeating the enemy.” Li Jing, a renowned general, helped establish the Tang Dynasty through decades of military exploits, mastering the arts of surprise, timing, and seizing opportunities.

Li Jing, a celebrated Tang dynasty military leader, was almost executed by the emperor whom he went on to loyally serve for the next 8 years. “You, general, rose to rid tyranny for the people. If you want to achieve great things, how can you kill a courageous man because of a personal grudge?” Li yelled out as he was dragged away to be killed.

Li Yuan, at the time merely a rebel, but one who toppled the Sui Dynasty and established the Tang Dynasty, was struck between the eyes by Li Jing’s courageous words, and spared his life. Indeed, Li Yuan made Li Jing his trusted lieutenant, even after Li Jing almost blocked his rise by telling the old Sui rulers of his plans to rebel.

Beginning in his 40s, a time when many men of war are beginning to slow down, Li began climbing toward his prime, conquering vast swathes of land for the mighty Tang Dynasty, suppressing rebellions, and laying down the Tang’s borders.

All this was exactly what Li had hoped for, but could never have expected when, as a young man toward the end of the Sui Dynasty, he practiced swordcraft in the yard of his courtier family. Li once told his father: “A man should earn wealth and social position through exploits in a turbulent age, in the service of great emperors.”

Turbulence is exactly what Li walked into. The tyrannical Sui emperor Yang (A.D. 569-618) was eventually overthrown by a Sui general who decided that it was time for China to turn a new leaf.

In May 618, that general, Li Yuan, established the Tang Dynasty, becoming Emperor Gaozu. Li Jing was made his top general and charged with pacifying the realm.

In A.D. 626, Emperor Gaozu retired and was replaced by Emperor Taizong. Li Jing continued to serve in Emperor Taizong’s administration, and was soon made the Minister of Justice. In 628, in addition to that post, he also became acting head of the Legislative Bureau of the government, and in 629, he was made the Minister of War. Following his appointment, Li built his statuesque reputation by quelling the rebels over the next 30 years.

His first victories came through acting on his own judgment, against other commanders’ advice. Li Jing raided the Liang state, a part of China that the Tang Dynasty sought to bring into its territory. Rather than wait for the raging Yangtze River to slow its flow after the rainy season, as other generals cautioned, Li Jing seized the moment and crossed, launching a surprise attack on the holdouts and capturing several cities within a month. In an opposite case, a fellow general was itching for action and, against Li Jing’s advice, decided to launch an attack. The general was seriously defeated. But Li Jing swooped in with a counterattack that resulted in the seizure of 400 ships.

Outstanding military victories like this showed supreme judgment, unclouded by ego. He was brave in battle, yet known by all for his composure and steadfastness; and when his opinions differed from other Tang leaders, Li Jing was unfailingly humble and respectful, sometimes so much so that in conferences he seemed unable to speak.

This was recognized again during his sallies in the northern part of the empire. There, he secured territory from the nomads who positioned themselves on the plains before they swept through China looting and plundering. Indeed, at one point, the nomads almost destroyed the fledgling Tang Dynasty, forcing Emperor Taizong into a humiliating alliance with one of their leaders.

At the age of 58, Li was appointed by Emperor Taizong to head a massive army of 100,000 soldiers, meant to crush the invaders and remove the threat once and for all.

But in the end, Li didn’t need the army: he defeated the Eastern Tujue or Turk intruders with just 3,000 cavalry in a series of masterful surprise attacks. Jiali Khan, their leader, exclaimed: “If the Tang did not come north with all its military forces, how could Li Jing dare to come so far with just a few soldiers!” The Tujue had by that time lost several key city centers and were psychologically defeated.

“It is unprecedented,” Emperor Taizong remarked after hearing the news. He sighed with relief: “Li Jing has avenged the insult I suffered.”

Following those battles, Li Jing was made the prime minister of the Tang Dynasty and was bestowed the honorary title Duke of Wei. But by then he was in his 60s, and, four years later, requested permission to retire. Emperor Taizong accepted and made Li a role model for other generals to follow.

Like all great odysseys, this one has a sequel. Li Jing was soon recalled to rescue the country from another catastrophe: raiding Mongols. Li met with the chancellor and accepted the appointment. He immediately set out and engaged the enemy, defeating them in the first battle and then driving them deep into the north, nearly 1,000 kilometers away. Grueling, protracted warfare occupied a year of Li’s energies.

Defeating the Mongols was Li Jing’s last major expedition. He died in July 649, 78 years old, and was accorded the highest honors of a servant of the Emperor — to be buried near Taizong’s own tomb. Li Jing’s military foresight and wisdom, and his humbleness in resigning from his post as prime minister after just four years, were praised for generations. Su Xun, a gentleman of letters who lived 400 years later, summed up Li Jing simply and accurately. He called him “a virtuous general.”