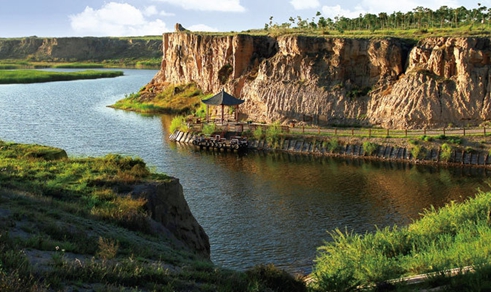 The Second Northwest Institute for Ethnic Minorities (SNIEM) in Ningxia Hui Autonomous Region recently disclosed to the outside world the most ancient picture writings in China. (Image: wikimedia / CC0 1.0)

The rock art research center of the Second Northwest Institute for Ethnic Minorities (SNIEM) in Ningxia Hui Autonomous Region recently disclosed to the outside world that the most ancient hieroglyphs in China, discovered among the numerous independent cliff painting groups at Ningxia’s Damaidi, are thousands of years older than oracle-bone inscriptions. The discovery may change the history of Chinese characters.

According to a report of China’s Xinhua News Agency,  a surprising number of prehistoric cliff paintings were discovered at Damaidi, Beishan Mountain, Weining, Ningxia, which dates back to the late Paleolithic period (Old Stone Age), about 20,000 years ago.

The surveys and studies by cliff painting experts at the SNIEM found that there are 8,453 individual cliff painting figures at Damaidi in 3,172 groups. The figures feature the heavenly bodies (sun, moon, and stars), holy spirit of Heaven and Earth, hunting and herding, dancing, and sacrificial rites.

These experts determined that the early cliff paintings were 16,000 to 10,000 years old. They have conducted an on-site investigation and in-depth studies on individual figures of the cliff paintings for nearly two years, and their findings have been appraised by Shanghai’s ancient Chinese characters expert, Liu Jingyun.

The research revealed that the pictures and symbols discovered in Damaidi were Chinese ancient characters, and many of the hieroglyphs and abstract signs have acquired the key elements of ancient writings. Similar hieroglyphic characters can also be found in symbols and signs of the Pottery Writing (5000 to 1600 B.C.) discovered nearly at the same period of time, and oracle-bone inscriptions afterward. Moreover, certain compound characters comprised of two or more hieroglyphic signs have also acquired essential elements of hieroglyphic characters, logical aggregates, and self-explanatory characters.

What’s more interesting is that such hieroglyphic signs were not marked sporadically in Damaidi’s cliff paintings; instead, they formed a star-shaped distribution. Li Xiangshi, a researcher from the rock art research center of the SNIEM, pointed out that among the 1,500-plus signs of pictures and writings found at Damaidi, only a small quantity of them have been successfully deciphered, yet most remain unknown.