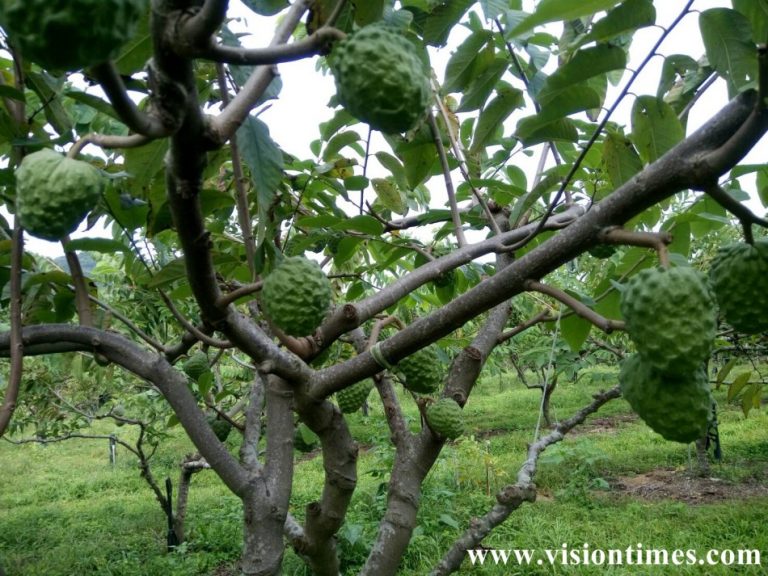 Please watch the following video of Chihshang Township in Taiwan:

Alluvial soils with nutrient-rich organisms, coupled with fine weather and clean water rich in minerals, cause the rice produced in Chishang Township to have a sticky and elastic quality, with a pleasant and gentle fragrance.

Many farmers in Chihshang Township grow canola as fertilizer before the start of the rice planting season, normally between December and February. Rice paddies are therefore filled with numerous yellow canola flowers (油菜花) during this period of time. The picturesque scenery and cozy bike trails among the rice paddies have attracted numerous visitors year-round.

In fact, after TV commercials for Mr. Brown Coffee and EVA Air, which featured famous Japanese-Taiwanese actor Takeshi Kaneshiro (金城武) sipping tea in the shade of a landmark 7-meter-tall tree in the picturesque rice fields some years ago, Chihshang Township has become a popular tourist attraction in recent years.

Sugar apple (釋迦), also known as sweetsop or Sonona squamosa, is an iconic fruit of Chihshang Township. This round or heart-shaped custard apple with a green scaly rind and a sweet pulp is very delicious and juicy. When the fruit is ripe, the tortoise-like shell gap will be open and become creamy yellow. In Taiwan, it is usually called Sakya (Buddha’s head), as its tortoise-like shell resembles the top part of Sakyamuni’s head.

Xiaoyeliu (小野柳 Little Yeliu) is a small coastline park not far from Chihshang, which is another top sightseeing destination in Taitung County. Since there are a variety of fascinating rock formations similar to those at the Yeliu Geopark in northern Taiwan, it was given the name Xiaoyeliu. It’s a great experience to examine the strange formations, such as mushroom rocks, tofu rocks, honeycomb rock, and fungus rock, while gazing at the pounding waves in the pleasant breeze.

After visiting Xiaoyeliu, another nearby destination worth visiting is Taitung Seashore Park. Visitors can see the International Landmark with a round roof composed of bamboo and rattan as well as other public art installations there. There is also a bike trail running along the coast and through the park. Strolling along the seashore, visitors will be amazed by the numerous rocks with striking shapes in various sizes. People like to take photos with a red frame there in memory of their trip to this beautiful destination.