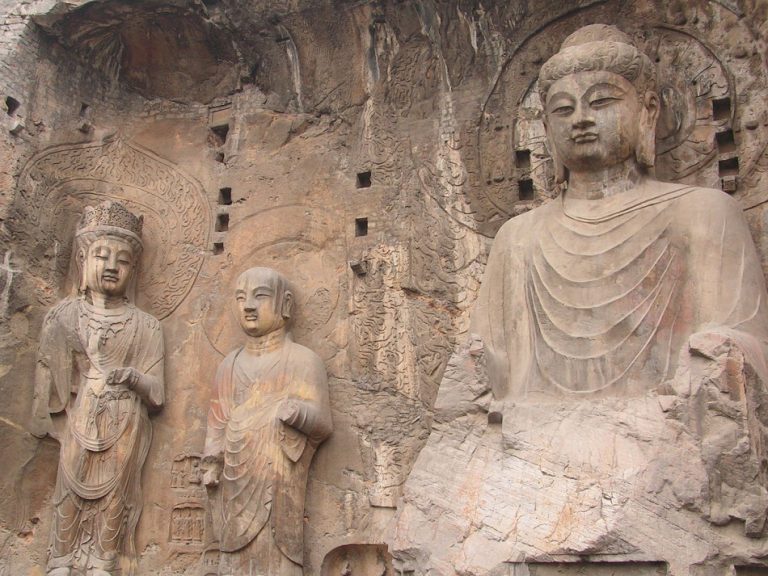 The Longmen Grottoes in Luoyang. (Image: Rialfver via wikimedia)

One of my Chinese friends in Germany exclaimed enthusiastically: “The old imperial city of Luoyang, with her peonies and poetry from the Tang Dynasty, for me is an expression of peace, riches, and of harmony long ago; something that impresses me deeply.”

He spoke of the central Chinese city in positively glowing terms; Luoyang was already a highly developed metropolis during the Tang Dynasty (618-907) with more than 1 million residents.

Perhaps it was the old Luoyang and memories of the beauty of former Chinese culture that persuaded a group of Chinese people to regale the population in the streets of the city and at tourist spots by wearing traditional Han Dynasty (206 B.C.E. to A.D. 220) attire. They had come from over a dozen cities, such as Shanghai, Changzhou, Shijiazhuang, and from the older imperial city of Xi’an. They wanted to create awareness of the lost values of ancient Chinese culture.

A capital of culture and scientific knowledge

Luoyang also elected 13 of her citizens to become emperors of the region, viewed as the cradle of Chinese civilization. Located south of the Yellow River, in the heart of China, the city had always played an important role, perhaps not as the seat of government, but certainly as a prominent center for culture and scientific knowledge.

Many legends about the establishment of Chinese culture are tied to Yellow River lore, such as deities arising from the waves to bring culture to the people. Among these beings arising from the waters is a horse with the head of a dragon, carrying a drawing on his back from which the Eight Trigrams were later developed. Legend has it that a turtle also arose from the River Luo — giving the city her name — carrying on its back an image of the future mankind.

All of China knows this phrase, “Writing paper in Luoyang has become quite expensive,” and this alludes to the renown of the city’s literary creations. The saying is attributed to the poet and writer Zuo Si of the Jin Dynasty (265-420), whose writings were so prized that countless handwritten copies were made and distributed, thus quickly exhausting the available supply of writing paper.

His literary masterpiece is entitled Ode to the Three Capital Cities of Wei, Shu, and Wu. According to historical records, it took the writer 10 years to complete the work. The ode chronicles customs, habits, and daily life in the three cities; the title alone alerts one to his particular style and the subject of his writings.

Following the horrors of the Cultural Revolution, and in the context of the close to 70-year rule of the Chinese Communist Party, again embracing ancient Chinese culture would do much for the Chinese population — if no more than to arrive at renewed common sense, and trust in the nation’s ancient values.

The original article from The Epoch Times.