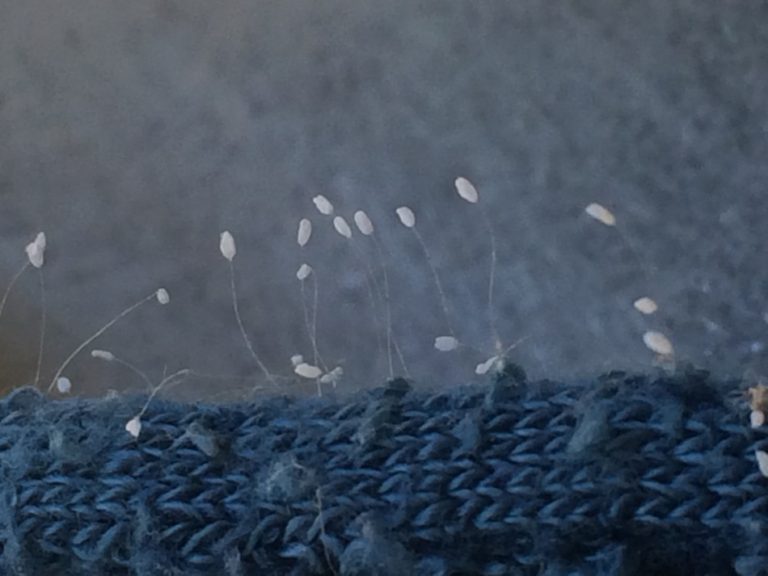 The name udumbara comes from the ancient Sanskrit language, meaning an auspicious flower from heaven. Udumbara flowers are a tiny white tulip-shaped flower that grows on a white thread-like stem.

The flowers do not have leaves or roots, and they grow on anything, from your car to plants, shoes, fly screens on windows, metal objects, plastic, windows – anything. Udumbara flowers do not need water or soil to grow, and there are no seeds to plant.

Found in volume eight of the Buddhist scripture from the Huilin Phonetics interpretation: “Udumbara is the product of ominous and supernatural phenomena; it is a celestial flower and does not exist in the mundane world. If a Tathagata or King of the Golden Wheel appears in the human world, these flowers will manifest due to their great virtue and blessings.”

In the Mahayana Buddhism’s scripture, The Lotus Sutra: “A mythical flower, blooming once every 3,000 years, heralding the advent of the King of the Golden Wheel.”

Udumbara flowers were found and documented before the birth of Gautama Buddha, also known as Shakyamuni Buddha or Buddha.

Found in Buddhist scriptures derived from Buddha’s teaching, the umdumbara flower is believed to herald the return to the human world of an enlightened being, or Buddha.

The Buddhist legend goes on to foretell the arrival of a “Holy King Who Turns the Wheel,” rectifying the Dharma (moral laws) in the world. The scriptures continue to explain that the king would accept anyone of any religious affiliation, offering salvation to all through compassion.

One of the first udumbara flowers seen was on a golden brass Tathagata statue in the year 1997 at the Cheonggye-sa Temple in Seoul, South Korea.

Udumbara flowers were then found all throughout China and in many countries around the world. The Chinese Communist Party claimed the flowers were lacewing eggs, but the flowers differ greatly because of their beauty. Tiny petals of the flower are visual to the naked eye and they are resilient, surviving for a year and longer.

I come from a small town called Mildura in Australia, and on one of my visits to the city of Melbourne, I was shown my first udumbara flower. A small cluster grew on some scrap metal that was sitting on a bench near a back door.

It was a cool morning and the flowers were so delicate and all the thread-like stems were arched on their side like the wind had blown them that way. I was so touched and in awe as they made this scrap metal so beautiful. They were so amazing to find, but I carried no camera, so I didn’t get a chance to take a photo!

I viewed many pictures on the Internet and heard many stories of friends who found udumbara flowers. My hometown is known for its hot and dry weather, and I thought the flowers needed moisture to survive, so I stopped looking for them.

Years passed and I moved to Melbourne. On arrival, and after I put my luggage away, I spied something growing on a small pottery pot plant holder that was in the shape of a shoe. I found udumbara flowers! More flowers were found while cleaning up an outside entertaining area, growing on the side of the hanging basket.

I found udumbara flowers in many places. The tiny little flowers adorned objects on my back verandah and on the fly screens of the windows. It was becoming the norm for me to find these treasures every now and then. I remember going to my car one time and as I reached for the car door handle — I saw that udumbara flowers were growing on my car. Wow!

A couple of years passed since I left Mildura, but on one visit to my parent’s house, I found them on the fly screen sliding door. What a surprise!

In the past year, I noticed that many of the clusters of udumbara flowers had disappeared, and I had not seen any new ones for a while. I worried that I may not see any more, as I recalled how they were so dainty and carried a unique beauty.

However, at the start of this year, I found a new cluster of udumbara flowers on an outdoor mat that I use for meditation! So special was this moment was for me that I hope more people find udumbara flowers too!