The Pipa: The Traditional Chinese Guitar 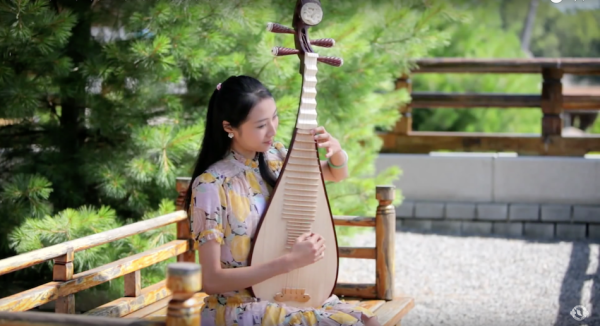 The pipa is often referred to as the Chinese lute, and may remind you a little bit of a Western guitar. The history of the instrument reaches back over 2,000 years.

The pipa is a stringed instrument that gained great popularity in the Tang Dynasty (618-907). As an instrument for fairies and gentle women, the pipa appears in paintings of that time period, and poets praised the delicate and refined sound of the instrument. Bai Juyi (772-846) wrote the most famous verses about a female pipa player:

The bold strings rattled like splatters of sudden rain,

As pearls, large and small, on a jade plate fall.

As the Tang Dynasty was the time in which religions, economics, and culture flourished, many foreigners came to China via the Silk Road. Among them, Persian musicians who played the pipa’s Persian sister, the “barbat,” passed their playing techniques on as teachers or served as musicians for the nobility.

The instrument’s signature pear shape is said to be derived from this Persian influence. However, in the Tang Dynasty, the form of the instrument changed from round to the form we know today. Many of the old pipas that survived from that time period are decorated with intricate carvings and inlays on their backsides.

The pipa is strongly connected with Buddhism, and in the famous caves of Dunhuang, there are countless depictions of flying fairies playing pipas.

In Korea and Vietnam, regional versions of the instrument evolved, and in Japan, the pipa became known in the 8th century under the name of “biwa.” Benten, a Shinto-Buddhist goddess in Japanese folklore, is often depicted with a biwa. She was venerated as the goddess of femininity and the guarding goddess of the geishas, who used to play the instrument.

Since the Sui (580-618) and Tang dynasties, the pipa’s popularity has remained steady. It was used in court entertainment orchestras, folk ensembles, and as a solo instrument. While in the olden days pipa players used to hold the instrument horizontally and used a big plectrum for playing, in China, the plectrum was abandoned already in the Tang Dynasty, and musicians plucked the fine silk strings with their fingernails, holding the instrument vertically. The plectrum method is still prevalent in Japan today.

With the change of taste in modern times, musicians have tended to put on nylon or metal strings to achieve a louder sound. These strong materials asked for a powerful plucking technique, and false fingernails made of plastic or metal became necessary. Another change according to modern music understanding was made in the tuning: Modern pipas are commonly tuned in A-E-D-A.

While the old pipa used only 5 to 6 frets, the number of frets went up to 31 in the 20th century, to feature a complete European scale with 12 halftones — as life became more complicated, music did too.