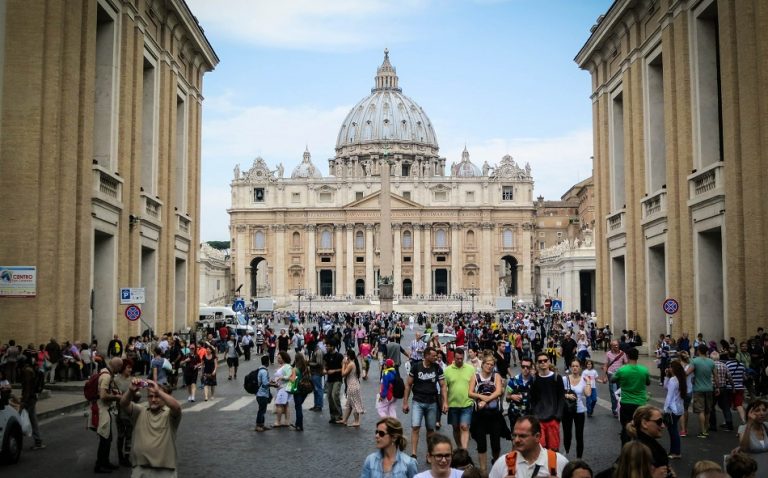 A file image of St. Peter’s Basilica in Vatican City, the papal enclave within the Italian city of Rome. (Image: via Pixabay)

Not long after taking power in China, the officially atheist Chinese Communist Party (CCP) broke off ties with the Vatican. But now, the Vatican’s China moves and ongoing back-room negotiations between officials from the Holy See and Beijing could change that, much to disillusionment of many Chinese Catholics.

As part of the Vatican’s 4-year-long efforts to restore diplomatic relations with Beijing, a “gentleman’s agreement” has been agreed where Pope Francis would recognize seven illicit bishops from by the CCP’s Catholic Patriotic Association (CPA), reported Reuters.

Vatican officials say their dealings with the CCP are required to unify China’s two Catholic communities — the so-called open church, which is state controlled, with the underground church loyal to the pope.

A senior Vatican source told Reuters that a framework about bishop appointments could be signed within the next few months. But the source told the agency that the deal is not perfect.

“It is not a great agreement, but we don’t know what the situation will be like in 10 or 20 years. It could even be worse,” the source said on Thursday.

“Afterwards, we will still be like a bird in a cage, but the cage will be bigger,” he said of the situation in China for Catholics. “It is not easy. Suffering will continue. We will have to fight for every centimeter to increase the size of the cage,” he said.

News on the deal also followed reports on how the Vatican recently replaced two Chinese bishops loyal to Rome with two illicit bishops appointed by the CPA. The Vatican’s China moves in this regard have not gone down well.

One of the sidelined underground bishops served a region of southern China where there were 80,000 Catholics, most of whom were underground Catholics.

The sidelining of the bishops prompted Hong Kong Cardinal Joseph Zen Ze-kiun to travel to Rome to give Pope Francis a letter of concern from Bishop Zhuang Jianjian of the southern Chinese city of Shantou. Bishop Zhuang was one of those bishops asked to step aside.

As reported on previously, Cardinal Zen has many times voiced his disquiet over the pope’s approach to the Chinese government and on how he understands its ruling communists.

The man has spent a lifetime close with people who have been tortured and killed for the principle that now seems to be conceded by the Vatican. https://t.co/fXuMVpwkyd I find it very difficult to see this as a reason to distrust his judgement.

“Do I think that the Vatican is selling out the Catholic Church in China?” the Shanghai-born cardinal asked in his post, reported AP. “Yes, definitely, if they go in the direction which is obvious from all what they are doing in recent years and months.”

The cardinal’s statement brought on a reproach from Greg Burke, the press office director of the Vatican.

But the Vatican’s China moves have disillusioned many Chinese Catholics.

A Catholic priest in Hong Kong, requesting anonymity, told Quartz that the Argentina-born Pope Francis looks at communism from the prism of South America.

“I do not want to criticize the Holy Father, but he does not understand what communism in China means,” said the priest. “And he doesn’t see that if we give up on the appointment of the bishops, or on full diplomatic recognition, the church and its faithful would be giving up the only bargaining power they ever had.”

I get it if a large biz needs to acquiesce to China but the Catholic Church? Catholics in China will find a way to the underground church as they have for decades. Pope Francis has decided to accept 7 excommunicated bishops appointed by Beijing https://t.co/2YrKAVLZkH

Xi Lian, a professor of world Christianity at Duke Divinity School, told The Washington Post that to underground Catholics who have at times suffered fines and even imprisonment to remain loyal to the pope, the move to sideline their bishops is “a slap in the face.”

“The Vatican risks losing its spiritual authority and dampening the spirit of the Catholics.”

“A lot of people like myself look to the Holy See as one of the strongest defenders of religious freedom and the Catholic faith,” said Chan, an associate professor at Hong Kong Baptist University and a pro-democracy activist. “To me, this is disturbing. I don’t think it sends the right message.”

In #China, #Catholics are split between an “underground” Church that recognizes the pope and those belonging to a state-controlled group where bishops are appointed by the Communist Party. https://t.co/0p0SP9JZvv pic.twitter.com/to6WWRrO31

Catholicism in the People’s Republic of China

Not long after taking control of China in 1949, the CCP cut diplomatic ties with the Vatican and expelled foreign missionaries.

In 1957, the communists set up the Catholic Patriotic Association in a bid to control what remained of the church.

When the communists sought to eradicate religion from society during the Cultural Revolution (1966-76), churches were shut and Catholics were targeted as “enemies of the people.” Untold numbers of Catholics were killed.

After Chairman Mao Zedong died in 1976, restrictions upon religions relatively eased, but communist authorities continued to harass and discriminate against Catholics and other Christian groups.

In 2014, the Chinese government said that there were 5.7 million Catholics who were part of congregations registered with the state, said a Freedom House report released this year. The report’s author, Sarah Cook, wrote that there are approximately 12 million Chinese Catholics who worship in unofficial churches.