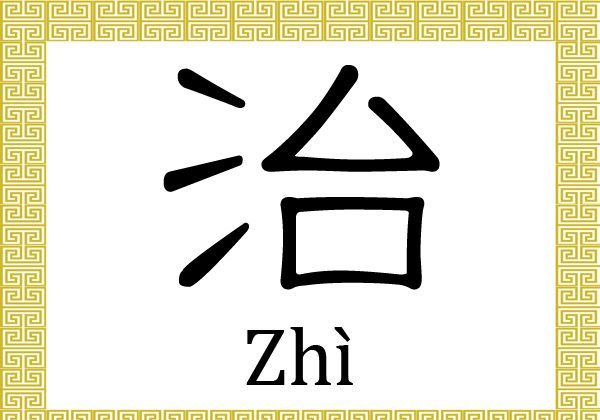 In Shui Jing Zhu (水經註) (Commentary on the Waterways) written by Li Daoyuan, this character is used to specifically describe how Dayu controlled the waters and prevented flooding.

The left side of the character is the water radical 氵(shuǐ), which also indicates the basic meaning. The right side is the character 台 (tái), which means platform or terrace.

The composition of the Chinese character for heal (治) illustrates the reasonable methods that Dayu used to prevent and control floods, such as building dikes and terraces according to the natural flow of the water instead of blocking and redirecting it.

The meaning of the character was later expanded to “govern” or “manage,” such as in the word 治國 (zhì guó), govern a country or manage state affairs.

It also means to treat illness or to cure [something]. The water radical reflects traditional Chinese medicinal soups and herbal concoctions that were developed to manage or cure illnesses.

The character 治 is always used as a verb.