Cangjie and the Invention of Chinese Characters 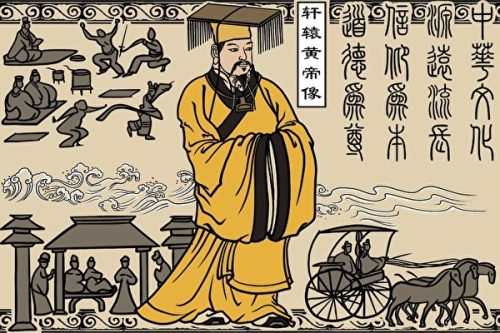 According to legend, Cangjie, an official under the Yellow Emperor, created the Chinese characters. (Image: via Epoch Times)

According to legend, the Chinese characters were invented by a man named Cangjie, who was an official during the time of the legendary Yellow Emperor, Huangdi. Huangdi assigned Cangjie the job of keeping track of the livestock and grains because he was known to be a very intelligent person. Within a short time, he was able to memorize all the items in his care, but the stock gradually increased so much that he was unable to memorize everything.

He was in a tough position. At that time, there was no written language, so he could not simply write everything down. After careful consideration, he had the idea to use shells and knots on different colored ropes to represent the quantities of different foods. This method was more practical, and it was in use for several years. However, he realized that as food stores increased, the number of ropes and shells would soon become ineffective. He pondered: “What can I do to prevent any mistakes”?

As fate would have it, one day Cangjie went hunting with several other people. When the group came to a fork in the path, three people were deciding which path to take. He found out their decision was based on the different hoof prints on the ground. This inspired him. He believed if he could create characters that set apart each and everything on the earth, these could then be used for his record keeping.

Cangjie began to create symbols to represent different items. He paid close attention to the characteristics of everything, and before long he compiled a long list of characters for writing and organized them systematically. He presented them to Huangdi. Huangdi was so impressed that he brought the premiers of the nine provinces together so Cangjie could teach them this new writing system. Huangdi praised him and honored him with the post of historian.

Everyone complimented Cangjie and his reputation was well known. As days went by, he started to get conceited and he started to look down on those around him. When Huangdi heard about this, he was furious. Huangdi wanted him to realize how he had changed and return to his former humble self. Huangdi summoned an old man to discuss the situation. The old man pondered about it and decided to meet with Cangjie.

Cangjie was teaching a writing class, so the old man attended, sat quietly in the back row, and listened attentively. After the class, everyone left except for the old man. He asked the old man why he stayed behind. The old man said: “Cangjie, the symbols you created are well known to everyone, but I am an old man, and I could not see very clearly; there are a couple symbols that confuse me. Can you help me?” The old man continued: “The symbols you created for horse and mule were made to look like they have four legs, so those are clear. Yet a cow also has four legs, but the symbol for cow has no legs and a tail. Meanwhile, the symbol for fish has four legs but no tail. This is confusing to me as it seems backward.”

When Cangjie heard this, he panicked. He blamed himself for being careless; he mixed the two symbols up when he taught them. He was so embarrassed when realized how his arrogance had created this blunder. To make it worse, the symbols that he had created were spread far and wide, so there was no way to change them. He knelt before the old man and repented. The old man held Cangjie’s hand and said: “Cangjie, the symbols you created will be passed down for generations. You have done a great thing, but do not be so arrogant about it! You are still just a man after all.”

From then on, Cangjie scrutinized every symbol he created, sought other people’s opinions, and dared not be complacent. After everyone agreed on new symbols, the words would be taught to everyone.