Confucius, the Greatest Sage and Teacher in Chinese History 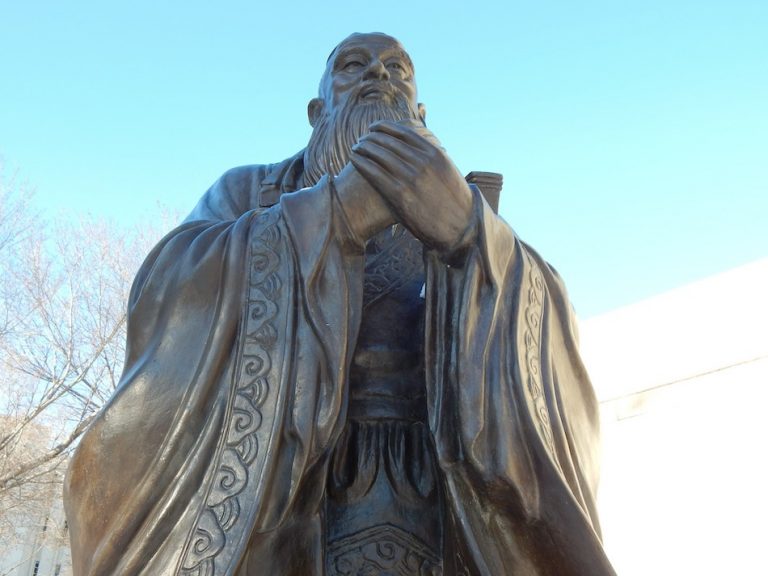 During the last several hundred years of the Zhou Dynasty (周朝), people’s selfish desires increased along with the development of society.

The ancient great virtues and the virtuous rule of emperors in the Xia Dynasty (夏朝), Shang Dynasty (商朝), and early Zhou Dynasty were replaced by individuals seeking personal interest. As a result, relationships among states were intensely competitive and many wars broke out.

During this period, great saints appeared in China.

Lao Zi (老子) imparted the Dao (道) — the way to return to one’s original, true self.

Confucius taught benevolence (仁) as the basis of moral behavior, while noting that the Dao is the ultimate goal, based on virtue (德), and relying on 仁.

The character 仁, alone or in combination with other characters, refers to concepts such as mercy, kindness, love, humanity, and charity. It expresses the idea of adopting a noble manner in conducting oneself in relationships with others.

His mother was a concubine of an elderly officer. When Confucius was 3 years old, his father passed away. He and his mother were very poor, but Confucius loved to read and learn about etiquette.

After he turned 30, Confucius began to teach. He once visited the capital of Zhou to learn from Lao Zi. He later served as a government official in several minor positions.

At about age 51, Confucius was promoted to a high-level position. He saw many injustices and an absence of morality in politics. He advocated his benevolence principle for governance, but his political philosophy was not adopted by his monarch.

Confucius had no choice but to resign. He went into exile and traveled from state to state across the Chinese empire to spread his teachings and belief in benevolent administration. However, the nobility did not accept his philosophy.

Confucius returned to his hometown in his 60s and dedicated himself to education. At the time, the common people had no opportunity to obtain an education, which was a privilege reserved for royalty and nobility.

Confucius was the first teacher in Chinese history to provide private education to the public, based on the concept of “teaching according to natural aptitude.”

He taught the classical traditions and the six arts, but emphasized morality as the most important subject. He taught that the true gentleman (君子, jūn zǐ) is a person of good education and moral character who values self-improvement.

Confucius seldom talked about private interest. If the topic was raised, he always linked it to fate, benevolence, and virtue. When his students could not handle hardships or difficulties, Confucius would use these moments as teaching opportunities to help them understand their situation.

He taught his students how to be good people, and he practiced his own principles. His students and future generations were deeply touched by his righteousness, kindness, humility, courtesy, loyalty to the country, and caring for others.

According to legend, Confucius had as many as 3,000 students. Among them, about 72 became outstanding sages and later worked to spread Confucius’s teachings.

In addition to the core concept of benevolence (仁), other key principles from Confucius’s teachings include righteousness (義), propriety (禮), learning and wisdom (智), honesty and trustworthiness (信), as well as filial piety (孝), loyalty (忠), and forgiveness (恕).

At the same time, he spoke of the Dao on numerous occasions.

The best example is from a chapter in the most well-known Confucian text, the Analects, in which Confucius stated: “Having heard the Dao in the morning, one can die in the evening (朝聞道,夕死可矣).”

With this statement, Confucius highlighted the preciousness of the Dao, and of the rare opportunity to be able to hear, recognize, and understand the Dao — so much so that one would be content to die the same evening, without regret.

He stated that he was not a creator of new ideas, but only wished to transmit and revive the ancient moral traditions of the Zhou Dynasty and its rule of virtue.

In China, Confucius is honored as “the greatest sage and teacher.”

His guiding principles for human interactions, one of China’s most cherished legacies, greatly influenced the Chinese people and culture for 2,500 years.