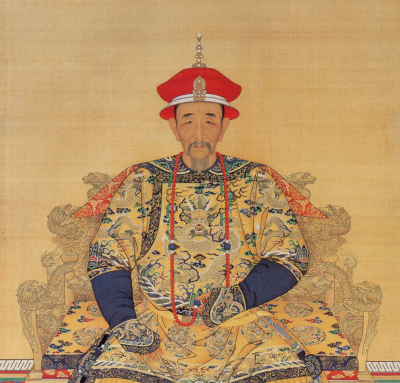 A portrait of the Kangxi Emperor in court dress. (Image: via Wikimedia Commons)

China’s famous Kangxi emperor was the second emperor during the Qing Dynasty, and his 61-year reign represents one of China’s most glorious eras. He began his reign at just 7 years old, on February 7, 1661. History books still praise his accomplishments to this day.

Kangxi had a deep understanding of both Chinese culture and Western thought, which made him one of the best-educated and most intelligent men of his time. This exemplary foundation was brought into play during a number of historical events during his reign.

Kangxi began to read and write at age five, focusing on Chinese calligraphy, and practicing writing thousands of characters a day.

While studying the Four Volumes of Confucianism, The Immense Learning, The Doctrine of the Mean, and The Confucian and Mencius Analects, he memorized each of the characters. He eventually demanded that his sons read each of these books 100 times and, like him, commit them to memory.

Once installed as emperor, he studied even harder, and occasionally vomited blood from exhaustion. Life for him was not to be taken as entertainment, but he believed that people gaining knowledge and education would lead the nation to peace and harmony. He never stopped studying and learning, even while on inspection tours throughout China; it mattered not if he was on a ship or in an inn, his books accompanied him everywhere. He read such volumes as The Book of Changes, The Annals of Zhou, Documents from the Ancestors, and The Book of Oracles.

Considering history as a mirror

Kangxi placed great importance on history and told his court to create a Qing Dynasty dictionary. In addition, he published the Kangxi dictionary, the ancient and still-used collected works of Gu Jin Tu Shu Ji Cheng, Tang poems, and many more. He also authored several of his own books, and collections of 1,147 poems were published during his reign.

Kangxi developed a great interest in medicine after he once became seriously ill. He had contracted malaria at age 40, and no Chinese medicine could cure him.

Eventually, two Christians, Hong Ruohan and Liu Ying, gave him frozen quinine, which cured him. This fortunate turn of events aroused an interest in Western medicine, and he had Western medicines made in his own laboratory at the palace. He encouraged all to get vaccinated against smallpox, which was a scourge at the time. His father, Emperor Shun Zhi, died from the disease; while Kangxi survived the disease, his face was left scarred.

To prevent traveling Mongolian nobility from coming in contact with the disease while in the city, he had his architects build pavilions and magnolia gardens close to the northern part of the Great Wall. This enabled the pilgrims to continue their journey without having to enter the seat of government, and thus avoid or minimize contagion from smallpox.

Kangxi ordered immunization for his family and those living in the palace, and he also recommended it to 49 other Mongolian tribes as a preventive treatment. His actions prevented many deaths.

Research into the natural world was also one of his passions. He welcomed French scientists Joachim Bouvet, Jean-Francois Gerbillon, and four of their colleagues to the palace in 1688. Their host gift consisted of 30 scientific instruments and a variety of books. The foreign guests from the West so enchanted Emperor Kangxi that he decided to have them join his court as advisers. For several years after that, the palace began to host scientists from all areas of specializations.

Many scientists praised Kangxi’s attitude toward science and wrote of their experiences at Emperor Kangxi’s court to King Ludwig the XIV of France.

“He is enchanted to learn new scientific knowledge and spent several hours with us every day, followed by a few more of self-study. He abhors wasting time and went to bed very late. Though we researchers appeared early at the palace, he had already been up and prepared for us. He readily asked out advice regarding his work, and sometimes asked new questions.”

“Kangxi loved the telescope, two wall clocks, and the planimeter. He kept all of them in his private quarters. He also much liked the compass.”

Following Joachim Bouvet and Jean- Francois Gerbillon to the palace were several other scientists. Their greatest achievement was to encourage the Emperor to undertake the monumental project of founding a Chinese Research Institute to map the whole of China. This ambitious plan, to give a comprehensive account of China’s cartography, came about all because French scientists had the opportunity to travel to China.

Kangxi lived from 1654 to 1722; his rich legacy will continue to be transmitted through history.