Did We Really Once Have Animal Trials? 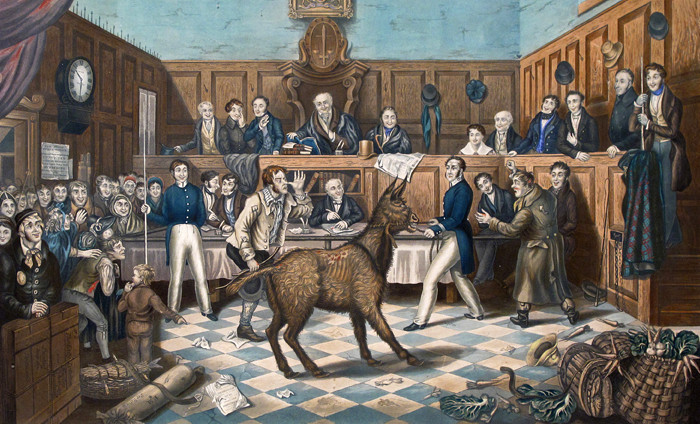 As societies evolved, so did our courts of law. The courts were used to set a line between right and wrong, and when people crossed that line, they were prosecuted and punished according to the law. (Image: wikimedia )

When animals attack, there is no formal prosecution, no court, or even a defense attorney appointed. However, this was not always the case. During the Middle Ages, animals were charged with crimes (usually murder) and were brought to court. They were appointed a lawyer and tried, just as if they were people; so yes, there really were animal trials.

As societies evolved, so did our courts of law. The courts were used to set a line between right and wrong, and when people crossed that line, they were prosecuted and punished according to the law. Since the law prohibited punishment without a trial, everyone and everything had to be taken to court — this included animals.

Animal trials are recorded from the 13th to the 18th centuries

From the 13th to the 18th century, there were many animal trials, with a number of these cases being officially recorded. The first record of this kind was the prosecution of a pig in France in 1266. This pig was accused of eating a child, found guilty, and executed. These trials were not for show; a judge, prosecutors, witnesses, and a defense attorney were all present and had a role in the animal trials.

Villagers in Savigny, France, witnessed the sow and six piglets attack and kill a 5-year-old boy. Witness testimony proved beyond reasonable doubt that the sow had killed the child; however, the piglets’ role was ambiguous. Although they were splattered with blood, they were never actually seen attacking the boy.

The judge sentenced the sow to be hanged by her hind feet from a “gallows tree.” Her six piglets were charged with being accessories to the crime, but were acquitted “on account of their youth and their mother’s bad example.”

While most of the trials took place in France, Italy, and Germany, there are a few historical records of trials in not only European countries, but in the United States, Canada, and Brazil. Animals were tried for an assortment of offenses, including murder, fraud, and theft.

Records indicate that many animals were tortured for confessions (humans were given the same treatment) prior to the trial. However, it’s not clear how the animal confessions were interpreted, since animals cannot speak human languages.

All criminal proceedings against animals were handled with the utmost seriousness by medieval legal authorities. Animals that harmed humans were considered servants of the devil. This was because they had violated God’s directive in the Bible that humans should have dominion over animals. A Bible verse, Exodus 21:28, was often cited as the grounds for executing an animal that had been convicted of murder:

“If an ox gores a man or a woman that they die, then the ox shall be surely stoned, and his flesh shall not be eaten.”

The penalties for non-serious offenses were matched with those given to humans for the same types of crimes. There was a variety of domestic and wild animals, as well as rodents, sea creatures, birds, and insects, that were tried by government or church courts.

Not all had to be physically brought to court — some were tried in absentia. It was usually only the larger domestic animals — such as pigs, bulls, cows, horses, sheep, and dogs — that had to appear in court and were subject to punishments.

Not all were found guilty; a few were found innocent or had been granted pardons or reprieves by authorities. Many wild animals found guilty by church courts were excommunicated (exiled from the church). Pigs were the vast majority of animals finding themselves in court; this was most likely due to farmers allowing them to roam free much of the time.

By performing well in animal trials, lawyers were able to establish their reputations. One example was a lawyer named Bartholomé Chassenée from France during the early 1500s. He was appointed to represent some rats that had eaten and destroyed some barley, which was a felony at the time.

Chassenée had used a series of ingenious legal ploys to delay the trial for as long as possible. He had even convinced the judge that it was too dangerous for his clients to come to court because of the many neighborhood cats. Chassenée had become famous throughout France for his brilliant legal skills.

Here are a few examples of animal trials

In 1474, the Swiss city of Basel bore witness to a satanic atrocity — a cockerel committing “the heinous and unnatural crime of laying an egg.” Deemed an act of heresy, the rooster was condemned to be burned alive at a judicial hearing. A somber crowd gathered for the feathered heathen’s immolation, with it being treated as seriously as the execution of a human heretic.

Crime: An elephant kills her handler

A 1916 parade in Kingsport, Tennessee, turned ugly when a circus elephant named Mary killed her handler. Having been on the job a day, he accidentally hurt Mary with a spear, and she reacted by knocking him down and stamping on his head. The crowd erupted, and soon a bloodthirsty lynch mob formed, chanting: “Kill the elephant.” They tried to shoot her, but the bullets fell from her thick hide, so they strung her up from a 100-ton railcar-mounted crane.

During the Napoleonic Wars (1792-1815), anything French was treated with suspicion in Britain. So after a French had shipwrecked off the coast of Hartlepool and the sole survivor made it into town, the locals were concerned he was a spy. Even though he was a monkey. According to local legend, the townsfolk held an impromptu trial, found the primate guilty, and hanged him. Though the story may be apocryphal, Hartlepudlians are still known today as the “Monkey Hangers.”

For the crime of causing crop damage in Stelvio (modern-day Italy), a company of moles was banished in 1519. After objection from the defendants’ lawyer, the paternal judge mitigated the sentence, adding a clause that those subterranean mammals “with young and to such as are yet in their infancy” should be given 14 days’ respite before being told to get out of town.

While it remains unclear why medieval courts went to the trouble to formally try animals before executing them, some historians believe that the trials were warnings to animals and people about the consequences of their actions. Others believe the trials represented a philosophical desire to exert some human control over nature.