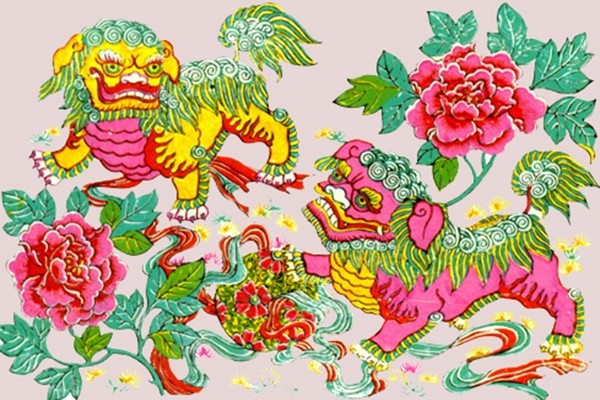 Auspicious symbols or patterns are important components of Chinese traditional culture. From ancient times, it has been common for Chinese families to fill their homes with auspicious symbols during Chinese New Year.

The history of China’s auspicious symbols dates back more than 3,000 years to the Zhou Dynasty (1100-221 B.C.), when images such as flowers, grass, trees and rocks, bees, birds, insects, fish, flying creatures, and animals were incorporated into paintings. There are three general elements to include when displaying the auspicious symbols: the image or pattern, the homophone or double meaning, and characters to illustrate.

A lion rolling a hydrangea ball

In ancient China, silk strips were used to form a hydrangea ball. It was considered an auspicious item for festive celebrations. According to the History of Han Dynasty, Etiquette and Music, the lion dance was already popular among the folk people during the Han Dynasty. Two people would play the lion, with one holding a ball of hydrangea, dancing up and down, and shaking the ball. The symbol of the lion rolling a hydrangea ball originated from the lion dance. The lion, a symbol of power, wisdom, and good fortune, was said to ward off evil spirits, as well as bring happiness and good luck.

An elephant carrying a precious vase on its back

Elephants can live up to 90 years and are therefore a symbol of longevity. The precious vase, according to Chinese legend, was said to be the water bottle of Guanyin (Goddess of Mercy), so its contents were holy. Drops of holy water from the vase were said to bring peace, health, and prosperity to mankind. Both are auspicious symbols for Chinese New Year.

Three goats or sheep standing together

The saying “San Yang Kai Tai” means three goats bring good fortune. This is a play on words since in Chinese, “goat” sounds the same as “sun,” as well as the “yang” for masculine energy (from yin/yang). “San Yang Kai Tai” is an auspicious Chinese saying from I-Ching (the Book of Changes) to signify that Spring is here and everything under the sun looks fresh, feels lively, and has a promising future. The popular image of three goats or sheep against a mountain landscape has been incorporated in paintings to wish people luck and prosperity. They are auspicious symbols of good fortune.

A child holding a carp

The homonym here is the fish (“Yu” in Chinese), which sounds the same as the Chinese characters meaning “extra” and “abundance.” People hang pictures of a child holding a carp during Chinese New Year as auspicious symbols to herald in wealth, happiness, and prosperity.

“Yuanyang” literally means “Mandarin ducks” in Chinese, but in old literary works, “Yuanyang” was often used as a way to refer to a loving couple. Mandarin ducks are believed to form lifelong partnerships and live very peacefully together in perfect harmony. Their love for each other is so profound that if one of them dies or disappears, the duck left behind will be devastated and lose the will to live. This auspicious symbol signifies a loving couple with a long, happy life together.

According to Chinese legend, the dragon was believed to bring rain. When people encountered drought, they often worshiped the Dragon King and prayed for rain. This practice evolved into lighting a “dragon lantern” during festive celebrations. In Notes Relating to the Extraordinary, a compilation of strange events traditionally attributed to Ren Fang (460-508), it was said that a dragon spit out a flaming pearl. The image of two dragons playing with a flaming pearl may have been inspired by this story, and dragons are thought to bring good harvests and prosperity as auspicious symbols.

A goldfish wagging its tail

The goldfish is also known as “golden carp.” Images of fish have been found in primitive pottery. During the Shang and Zhou dynasties, there were many jade and bronze fish images made. Since “fish” sounds the same as “extra” and “abundance” (all are “Yu” in Chinese), people like to display pictures of fish during Chinese New Year. In particular, the goldfish is associated with gold and jade, so the meaning of the image is “abundant wealth.”

A rooster crowing on top of a rock

A peacock facing the rising sun

The peacock is believed to be a manifestation of the heavenly phoenix (“Fenghuang”) on earth. According to Guo Pu, a Chinese writer and scholar during the Eastern Jin period, the phoenix had the head of a rooster, neck of a snake, throat like a swallow, back like a turtle, and tail like a fish. It stood six feet tall and its body contained five colors: black, white, red, yellow, and green. It was also said to originate from the “eastern gentleman’s state” and to “soar over the four seas, pass Mount Kunlun, drink water at the central pillar of the Yellow River, bathe in the most dangerous rivers, and sleep in a cold cave at night, looking after world peace.” There were many legends about the phoenix. During Chinese New Year, the auspicious symbols of phoenix birds are commonly used to herald in the year.