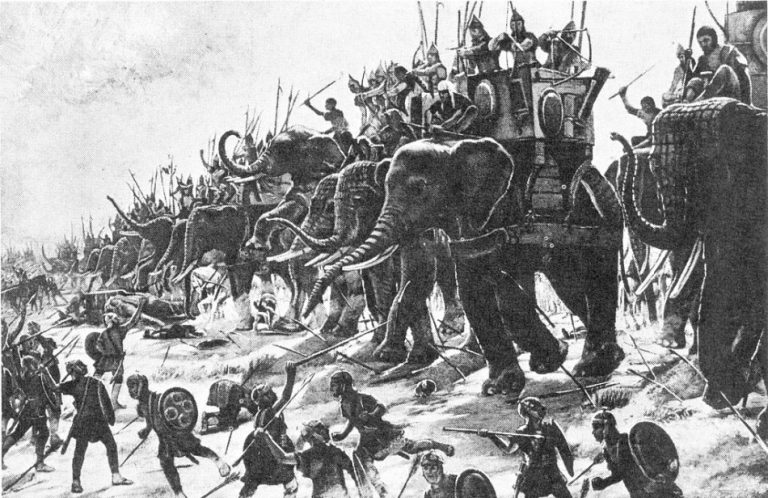 While elephants are known to be peaceful and majestic creatures, in ancient times their sheer size and power was used with devastating results. (Image: via Wikimedia Commons)

This is the story of how pigs defeated elephants in battle. We know that animals such as horses, elephants, cats, dogs, monkeys, and even rhinos have been used in ancient and modern warfare. But who would have thought that pigs (war pigs) would have been used as a weapon of war in ancient times?

War pigs, as they were called, were used as a countermeasure against war elephants; it seems the war pigs had an ability to terrify the much bigger war elephants. As it turns out, despite their massive size and power, elephants are scared by the smallest squeal of a pig.

Pigs defeated elephants in many ways

According to some histories, Roman legions would either let pigs loose among the elephants or suspend them from the walls of a besieged city. The thought was to make the pigs run uncontrollably into the ranks of the enemy, which would cause a certain level of confusion, or by hanging a pig from a wall, it would naturally squeal, which irritated the elephants to a point that they would retreat. This is the amazing way pigs defeated elephants in battle.

In perhaps the most bizarre tale from the siege of Megara during the wars of the Diadochi in the 4th century, the Megarians doused some pigs with combustible oil, lit them on fire, and then drove them toward the enemy’s seemingly indestructible war elephants. It resulted in the elephants bolting away in terror from the flaming, squealing pigs, causing a stampede, with the animals trampling large numbers of their own soldiers and killing them.

Despite being highly trained, elephants were no equal to the humble pig — their squealing was simply too terrifying. In finding a solution to this new countermeasure, elephant trainers came up with their own countermeasure. The trainers began keeping their young elephants with baby pigs in the hope that future generations would become unafraid of them.

Using war pigs had its downfalls as well. They had a relatively short range before the flames would consume them. Another problem was once the pigs were set on fire, it was hard to guarantee where they would go; there was just as much chance that the pigs would race through friendly forces as much as enemy forces, causing fires and chaos for both sides.