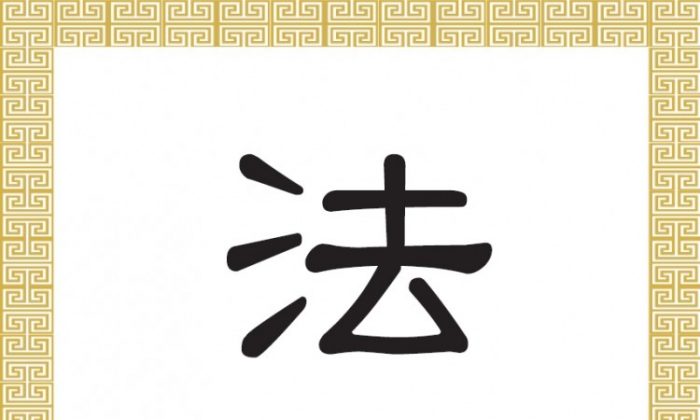 The Chinese character for law or way is 法 (fǎ). It is composed of two parts: 氵(shuǐ) and 去 (qù). 氵is a variant of 水 (shuǐ), the radical for water, while 去 means to go or to remove or do away with.

The original form of the character 法 was 灋, which has the same pronunciation but is made up of three parts: 氵, 廌 (zhì), and 去.

According to legend, 廌 is a divine creature given by the gods as a gift to the Yellow Emperor of ancient China.  廌, also known as 獬豸 (xiè zhì), is a very moral and righteous creature that has a single horn and is able to clearly distinguish right from wrong.

In ancient times, whenever there was a dispute that was difficult to judge, 廌 would be called upon to use its horn to identify the wrongdoer.

This encouraged the person to examine himself or herself, and also served to teach and help people to enlighten to what is proper and upright behavior.

In 法 and 灋, the 氵water radical symbolizes that which is the fundamental basis of things, while 去 gives the meaning of “going away” or “doing away with” what is not right.

The righteous nature of 廌, said to be the embodiment of fairness and justice, also speaks to the much higher morality of the ancient people compared to that of later generations.

When people’s hearts were good, high morals were the only law and standard needed for guiding behavior and for judging good people from bad people.

It can also be seen that, as moral degeneration gradually caused changes in people’s hearts, increasingly elaborate systems of laws became necessary to impose restrictions and protect people from harm.

Returning to the Fa

In the Buddha School, what one cultivates is called the Fa (法), the Law of the universe, as a way to return to one’s innate goodness. It is also what the Dao School calls the Dao (道), or the mysterious Way of the universe, also written as Tao.

法冠 (fǎ guān), or law crown, a hat worn by judges in ancient China, was embroidered with the image of 廌. This symbolized that those responsible for law enforcement, or 執法 (zhí fǎ), should conduct themselves like 廌.

That is, they must be as level as water, without favoritism or a selfish heart, and they must be skilled in telling right from wrong, dare to identify the wrongdoer, and do their work fearlessly to keep people from harm.

Composed of the character 亼 (jí), meaning to assemble or gather together, and 正 (zhèng), referring to what is upright and correct, the character clearly depicts that 法 is the bringing together of all that is right, and thus its role is to return to what is right.

The character 法 is used in many other character combinations that convey the idea of law or methods.

In addition, 法國 (fà guó) refers to the country of France, based on phonetic translation.