What Is Quantum Computing? 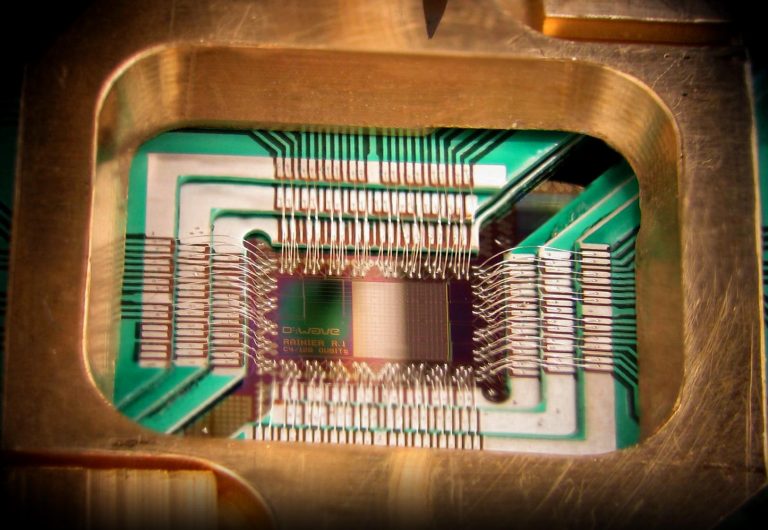 Critics in the field claim that D-wave system may not be a true quantum computer. (Image: By D-Wave Systems, Inc. via Wikimedia Commons)

Quantum computing, if it ever gets started, might help us solve problems, like modeling complex chemical processes, that our existing computers can’t even scratch the surface of.

However, unlike regular computers that can solve multiple problems, a quantum computer, at the moment, is far better at solving one specific problem only.

Companies and researchers are using a handful of different approaches to try and build the most powerful computers the world has ever seen.

In classical computing, a bit is a single piece of information that can exist in two states — either 1 or 0.

Yup, basically, a quantum computer is “Schrödinger’s cat” at work for you.

You can imagine a regular bit vs a quantum super-position the following way:

When, however, a qubit is in a quantum superposition, the point is practically at every possible coordinate on the surface of the sphere — at the same time.

It takes some time to wrap your head around the concept. And it is only after a qubit falls out of the quantum superposition and enters into a classic binary state (1 or 0) that the point allocates to one specific place on the sphere’s surface, at that given time.

Where are quantum computers today?

Until recently, it seemed like Google was leading the pack when it came to creating a quantum computer that could surpass the abilities of conventional computers. According to a Nature article, Google plans to commercialize quantum technologies in five years.

The search engine giant intends to achieve something it calls “quantum supremacy” with a 49-qubit computer by the end of 2017.

As awesome as this might sound, the so-called quantum supremacy, when quantum computers truly surpass classical computers, is still a highly debated subject even among peers in the field of its research.

Many in the quantum community are skeptical about the way Google speaks about its quantum project — or quantum computing in general.

IBM has taken it all a step further in regard to making quantum computing commercially available. Since 2016, it has offered researchers the chance to run experiments on a 5-qubit quantum computer via the cloud, and at the end of 2017, IBM started making its 20-qubit system available online too.

Rigetti, a Californian start-up, is focusing on the stability of its own systems rather than just the number of its qubits, and they might even become the first to build a quantum computer that people can actually use.

D-wave, a company based in Vancouver, Canada, has by now created what it is calling a 2,000-qubit system. Critics in the field claim that D-wave system may not be a true quantum computer.

With all the big leaps in the field of quantum computing research, it seems we can reach the stars. In reality, we still have a little bit further to go before we can say we have reached our goals.

Researchers hope that by using quantum mechanics they can figure out what’s going on deep inside that quantum computer — where the “magic” happens, so to speak. They hope they can discover new ways to make the process of quantum computing much more efficient.