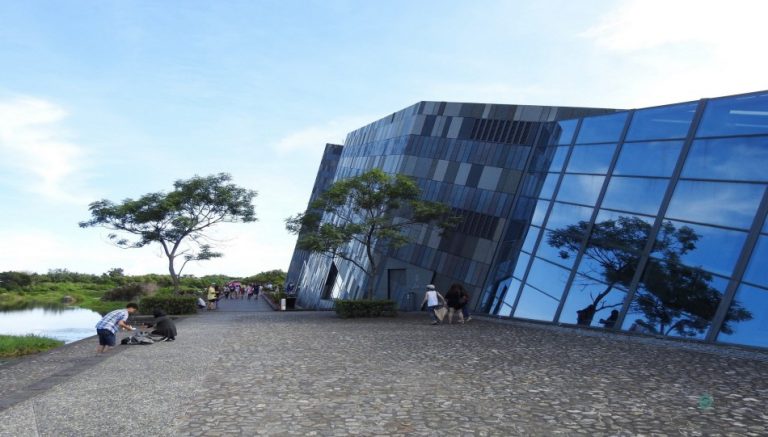 The Lanyang Museum (蘭陽博物館) looks like a cuesta (單面山) emerging from the surface of the lake. (Image: Billy Shyu / Nspirement)

Looking like a cuesta (單面山或半屏山) emerging from the surface of the lake, the Lanyang Museum (蘭陽博物館) is situated along a stretch of Taiwan’s Northern Coastal Highway in Yilan County’s Toucheng Township (頭城鎮). As cuesta are a unique geographical feature of Yilan, the museum was modeled after the shape of the cuesta topography commonly found along Taiwan’s northeast coast to reflect Yilan’s unique culture, history, and landscape.

Please watch the following video of the Langyang Museum:

The Museum is a triangular mass built into the ground, and its 20-degree angled roof rises directly from the ground to meet the wall coming out of the ground at 70 degrees. The building therefore looks like a cuesta with a steep slope, enabling it to fully blend in with the surrounding natural cuesta rock formation.

In addition to its striking shape, the museum’s four exterior walls were designed with Antonio Vivaldi’s Four Seasons Concerto (韋瓦第小提琴協奏曲「四季) in mind to make them look like musical notes. The four movements (樂章) of Spring, Summer, Autumn, and Winter are represented by stones with different textures to signify the four seasons of the Lanyang plain.

Additionally, each wall is fitted with a range of granite and aluminum panels to form layers. The arrangement and design of these panels are similar to the rock joints (岩石節理) commonly seen in the cuesta geography.

Lanyang Museum constructed between 2004 and 2010

The construction of the Lanyang Museum started in August 2004, and was completed in 2010. The museum not only won three top architecture awards in Taiwan in 2010, but it also received the 2012 International Architecture Award by the Chicago Athenaeum Museum of Architecture and Design.

The Lanyang Museum was opened to the public in October 2010. The museum’s permanent exhibitions are arranged in various groups on each floor — including the Mountains Level, the Plains Level, and the Ocean Level — to help visitors better understand Yilan’s overall geographical features, as well as its cultural and humanistic characteristics.

The Kid’s Land on the ground floor is a wonderland for school children aged 6 to 10, and the exhibitions are divided into nine theme sections to help visitors gain an insight into the distinctive oceanic resources of Yilan and knowledge about marine life.

As the museum is adjacent to the Wushih Port (烏石港), which was once a prosperous harbor that is now a wetland and part of its outdoor exhibition. The Lanyang Museum is a vivid example of the symbiosis of art and the environment as well as the harmonization of architecture and nature.