Chinese Idioms: Honey in the Mouth, Dagger in the Stomach 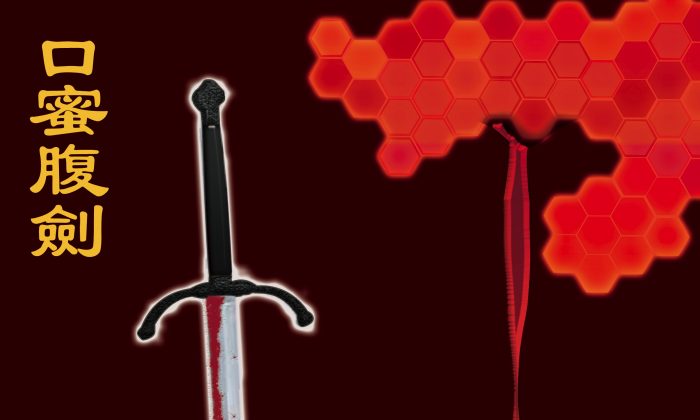 Honey in the mouth, dagger in the stomach. (Image: via The Epoch Times)

Among Chinese idioms, “Honey in the mouth, dagger in the stomach” means having a sweet tongue, but a malicious heart. It literally translates as “Covering a hidden dagger with sweet words or a smile,” and is often used to by Chinese to describe those who have a tongue of honey and a heart of gall.

Like many other Chinese idioms, this comes from a story during the Tang Dynasty

This idiom is based on a story from an early Chinese historiography from the Song Dynasty called Zizhi Tongjian (資治通鑒) by Sima Guang (A.D. 1019-1086).

As the story goes, Li Linfu was a prime minister for Emperor Xuanzong during the Tang Dynasty. Li was skilled at both calligraphy and painting, yet had a political career that made him known for sweet words that covered a malicious meaning or intent.

Li Linfu was cunning and treacherous. He was very jealous of virtuous and capable people, and adopted all kinds of strategies to discredit them.

Regarding the other ministers and high-ranking officials, Li would find something to praise and flatter them with when face to face, but he would also devise ways to punish those who upset him.

Emperor Tianbao had appointed Li Shizi as prime minister. One time, Li Shizi publicly pointed out a mistake that Li Linfu, then a lesser official, had made. Out of jealousy and hatred, though he pretended not to care, Li Linfu came up with a scheme to get rid of Li Shizi.

One day, Li Linfu told the prime minister that there was gold in Mount Hua and suggested that he ask for the emperor’s permission to mine it. Being of an honest and upright disposition, the minister immediately proposed that the emperor mine for this hidden treasure.

The emperor liked the idea and discussed it with Li Linfu. Li acted very worried and told the emperor that Mount Hua was the place where the emperor’s auspicious aura was gathered, that the feng shui there determined the fate of the dynasty and the empire.

If the mountain was mined, it would certainly be harmful to the emperor’s health. He asked: “Who is this person that wants to harm your majesty?”

The emperor was then convinced that it was actually a bad idea to mine Mount Hua, and later demoted the prime minister and exiled him to a remote area.

Li Linfu used similar schemes to get rid of many other political rivals.

As a result of manipulating the trust of his emperor, Li Linfu was eventually made prime minister. His immoral 19-year rule affected the empire, contributing to the decline of the Tang Dynasty.

A reputation for dishonesty

Discovering the truth, the other ministers knew Li was two-faced and started calling him “honey in the mouth, dagger in the stomach.” They realized he appeared friendly and would say kind words; however, deep down, he was the opposite.

Today, the idiom “honey in the mouth, dagger in the stomach” is used to describe a backstabber, someone who is always nice face-to-face, but is dishonest behind your back.