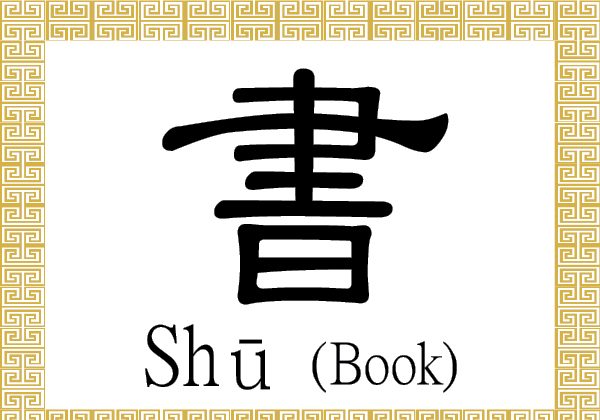 The Chinese character for book, letter, written document, or writings is 書 (shū).

書 is an ideogrammic compound, or associative compound, a type of Chinese character consisting of two or more parts with similar or different meanings combined to create new characters.

The character 書 comprises two parts. On the top is 聿 (yù), the radical/character for a writing instrument, such as a pen or brush. It is a pictogram that depicts a hand holding a brush.

On the bottom is 曰 (yuē), the radical/character that means to say, speak, or utter. It is an ideogram that represents the idea of speaking, through a picture of a mouth with an indicator mark inside pointing to the source of speech.

Together, the two components convey the idea of writing down what is spoken, as in the creation of a book.

A college or school is called 書院 (shū yuàn), and a library is called 圖書館 (tús hū guǎn), or a “place of [picture] books.”

書中自有黃金屋 (shū zhōng zì yǒu huáng jīn wū) states that “inside books you will naturally find houses made of gold,” advising people that through studying, they will naturally gain success.