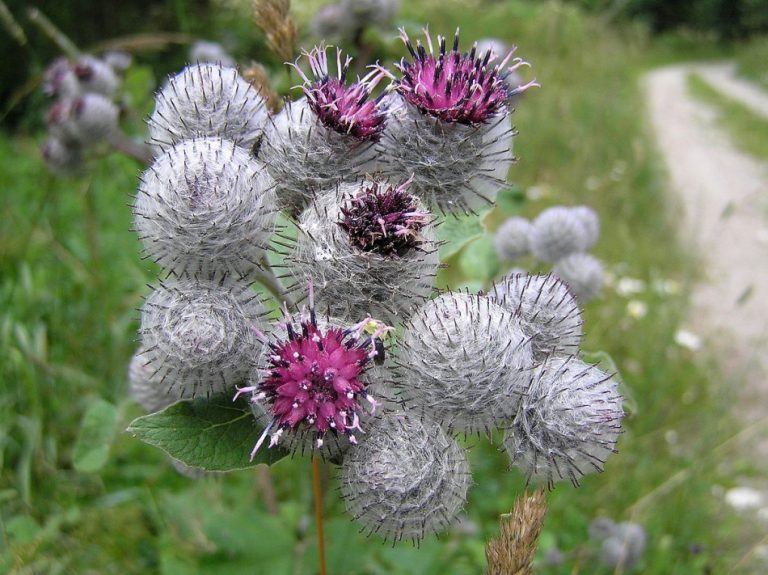 Burdock is ranked as one of the most prescribed herbs used by Western herbalists. (Image: Ecupas via Wikimedia Commons)

Burdock is ranked as one of the most prescribed herbs used by Western herbalists. It has a broad range of applications, but it is most specifically indicated for sciatica and stimulation of the kidneys.

The symptoms associated with sciatica have been plaguing humans for a very long time indeed. This affliction is first mentioned in an ancient Egyptian medical text known as the Edwin Smith Surgical Papyrus, which dates back to about 1550 B.C. It is also mentioned in the Bible.

The symptoms associated with sciatica include lower back pain that radiates down through the legs, knees, ankles, and feet. The aching pain may also be accompanied by a heat in the limbs, with possible swelling.

This pain is always worse when the person is immobilized, and those who suffer from chronic sciatica typically find it hard to sit in a chair for long without the onset of that radiating hot pain throughout the lower limbs and sacroiliac joint.

Burdock is good for sciatica

Sciatica is a condition that is commonly brought on by professions that require standing in one spot for hours at a time. Hairdressers spring to mind immediately.

Standing over clients for long days puts a load on the hip joints and the lower limbs, giving rise to that feeling of needing to get the weight off one’s feet. If muscles and posture start to slump, this can lead to pelvic misalignment, which can lead to sciatica.

Burdock is called for if all of these symptoms either disappear or improve when the lower body and legs are moved briskly.

The mineral profile of burdock is one that is effective primarily in the kidneys and sciatic nerves. Sodium and potassium are present in natural partnership to balance fluid levels in the body. The muscle sugar inulin is also present and stimulates kidney function and muscle tone in the lower body. The glycoside lappin is present and also provides further energy to kidney excretion.

The silica contained in burdock acts to break up any calcium stones in the kidneys, which are often the cause of lower back pain in individuals suffering from this set of symptoms. Burdock was regarded as a valuable remedy for this throughout the Middle Ages, when it was known as bardona.

Silica is also essential for the health of the nerve sheath of the sciatic nerve. Burdock root contains a high amount of mucilage, which soothes any irritation caused by stone or gravel in the kidneys, and also softens the eliminatory effects of this herb.

The type of person who presents with this set of symptoms has been characterized as needing to walk every day, but not being able to find the time. They are typically dismissive and phlegmatic about pain. Sleep may become interrupted as pain worsens at night, and these people may turn to higher dosages of painkillers, overloading kidneys that are already struggling.

The emotional stoicism typical of such people may see them putting off seeking treatment even with a set of symptoms including a backache, kidney stones, sciatica, and swollen legs. Such martyrdom may not be necessary, as chiropractic or osteopathic manipulation, combined with exercise, massage, and herbal medicine, can be very effective in relieving such pain.

The positive lesson to be learned for people who typically need burdock is that they simply need to walk. The rhythmic movement of a good brisk walk, arms and legs alternating as they stretch and stride out, is just what the doctor ordered for these types.

In our modern society, we tend to drive everywhere. Only a couple of generations ago, this was not the case. People generally walked if they wanted to get somewhere, and they were so much the better off for it.

The young stems and root of burdock have been traditionally eaten as a vegetable by many cultures throughout history, including the Japanese, Chinese, Indian, European, and the Native American cultures. A tea brewed from the root is also traditionally taken as a blood purifier and diuretic.

I would recommend that if you think burdock may benefit you in therapeutic amounts, you should see a professional herbalist who is trained in both its indications and dosage.

Written by Luke Hughes, a classical Western herbalist and horticulturist based in Sydney, Australia.