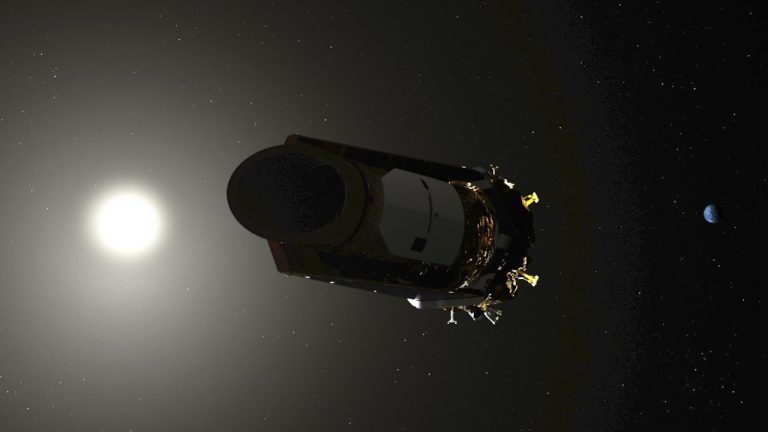 Trailing Earth’s orbit at 94 million miles away, the Kepler space telescope has survived many potential knock-outs during its nine years in flight, from mechanical failures to being blasted by cosmic rays.

At this rate, the hardy spacecraft may reach its finish line in a manner we will consider a wonderful success. With nary a gas station to be found in deep space, the spacecraft is going to run out of fuel. We expect to reach that moment within several months.

How Kepler had to stop

In 2013, Kepler’s primary mission ended when a second reaction wheel broke, rendering it unable to hold its gaze steady at the original field of view.

The spacecraft was given a new lease on life by using the pressure of sunlight to maintain its pointing, like a kayak steering into the current. Reborn as “K2,” this extended mission requires the spacecraft to shift its field of view to new portions of the sky roughly every three months in what we refer to as a “campaign.”

Initially, the Kepler team estimated that the K2 mission could conduct 10 campaigns with the remaining fuel. It turns out we were overly conservative. The mission has already completed 16 campaigns, and this month entered its 17th.

Our current estimates are that Kepler’s tank will run dry within several months — but we’ve been surprised by its performance before! So, while we anticipate flight operations ending soon, we are prepared to continue as long as the fuel allows.

The Kepler team is planning to collect as much science data as possible in its remaining time and beam it back to Earth before the loss of the fuel-powered thrusters means that we can’t aim the spacecraft for data transfer.

We even have plans to take some final calibration data with the last bit of fuel, if the opportunity presents itself. Without a gas gauge, we have been monitoring the spacecraft for warning signs of low fuel— such as a drop in the fuel tank’s pressure and changes in the performance of the thrusters.

But in the end, we only have an estimate — not precise knowledge. Taking these measurements helps us decide how long we can comfortably keep collecting scientific data.

It’s like trying to decide when to gas up your car.  Do you stop now?  Or try to make it to the next station?  In our case, there is no next station, so we want to stop collecting data while we’re still comfortable that we can aim the spacecraft to bring it back to Earth.

We will continue to provide updates on the science and the spacecraft, which has yet to show warning signs. Many NASA missions must set a course for a clear-cut ending and reserve enough fuel for one last maneuver.

For example, Earth-orbiting spacecraft must avoid collisions with other satellites or an uncontrolled fall to the ground, while planetary missions like Cassini have to reserve fuel to avoid contamination of a potentially life-bearing environment.

In Cassini’s case, NASA sent the spacecraft into Saturn rather than risk it falling into one of the planet’s moons.

Deep space missions like Kepler are nowhere near Earth or sensitive environments, which means we can afford to squeeze every last drop of data from the spacecraft — and ultimately that means bringing home even more data for science.

Who knows what surprises about our universe will be in that final downlink to Earth?

While Kepler continues to bring us exciting data as it draws close the finish line, the Transiting Exoplanet Survey Satellite (TESS) will be launching on April 16 from Cape Canaveral, Florida.

TESS will search nearly the entire sky for planets outside our solar system, focusing on the brightest stars less than 300 light-years away, and adding to Kepler’s treasure trove of planet discoveries.