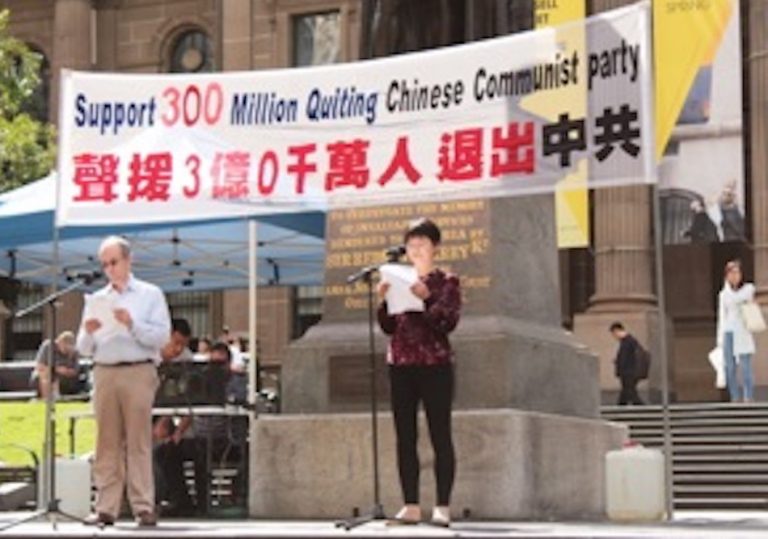 A speech given at the Quit the CCP Rally in Melbourne, Australia. (Image: Tina Wang)

Tuidang is a Chinese word meaning withdraw. For the Chinese people, the Tuidang movement means to remove themselves from any affiliation with the Chinese Communist Party. This movement has gained momentum in recent years, especially among China’s youth, as 300 million people have quit the Chinese communist Party.

Since 1949, the Chinese Communist Party (CCP) has used violence, torture, propaganda, and manipulation to control the will of its people. Orwellian means were ways of dealing with those who were considered a threat to the CCP’s power base. To this day, the leaders of the CCP still strive for full control of the Chinese peoples’ hearts and minds.

Children in China are taught about the CCP at an early age with political indoctrination occurring in kindergarten. Primary school children are made to join the Young Pioneers where they are given a red scarf and take a vow to dedicate themselves to the cause of communism. High school and university students join the Communist Youth League where they are considered a model for the cause of communism and are held above all other students.

The next step in this process is to become a card-carrying member of the CCP. If one is not a member, they will often be passed over for a job or promotion in a state-run company or government office. The people of China are taught to join the Party at a young age; however, an increasing number are not as keen on joining as in years past.

Members of the CCP vow to give their lives to the Party and to promote communism worldwide. In contrast, in a democratic nation, one is not asked to lay down their life for any political party. However, people from China can now disavow their loyalty without informing their CCP overseers.

People quit the Chinese Communist Party for themselves and the world

The Chinese people who choose to quit the CCP are doing so for the future of the world and for themselves. The Tuidang movement gives these people a voice and means to remove themselves from the Party and the guilt of its crimes.

How do people feel about quitting the CCP; is it normal for people to quit? In a more globalized world with its free flow of information, an increasing number are finding it abnormal to align themselves with the old ways of the Party. Ongoing corruption, tighter controls over information, and the recent power grab by China’s president Xi Jinping are causing many to reconsider their allegiance to the Party.

Falun Dafa (also known as Falun Gong) is a popular form of qigong, and is the practice of cultivating the body and mind through gentle exercises and meditation. Falun Dafa is practiced worldwide, except in China where it has been banned since 1999.

For those who continue to practice Falun Dafa in China, they have experienced cruel persecution at the hands of CCP. Falun Dafa practitioners follow Truthfulness, Compassion, and Tolerance throughout their daily lives and are good people, thus there was no reason to ban Falun Dafa and to continue to persecute its members other than that they are perceived as a threat to the CCP and its power base.

On March 25 in Melbourne, Australia, outside the State Library of Victoria, a rally was held by Falun Dafa practitioners. It was held to reach  out to Chinese people and to give them an opportunity to remove themselves from the CCP. People who came to the rally also experienced a wonderful performance by the Falun Dafa Celestial Marching Band and traditional Chinese waist-drummers.

Speakers at the rally talked about human right violations and evidence of the crimes against humanity committed by the CCP. Placards taught onlookers about the history of the CCP and its means of maintaining control over its people. The rally also provided an opportunity for Chinese people to quit the CCP.