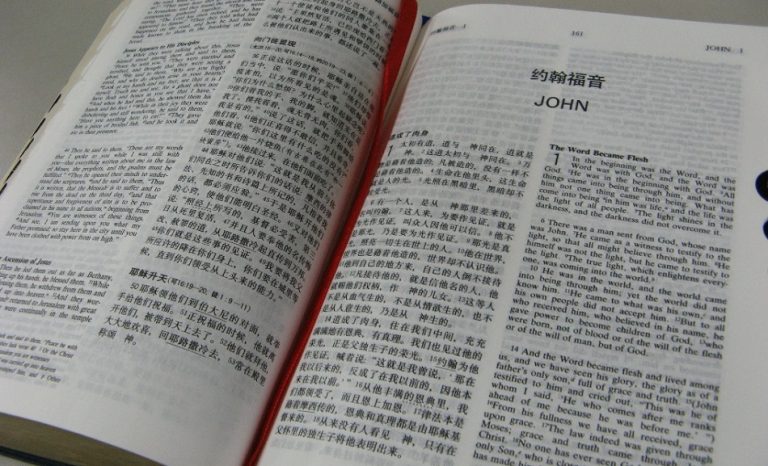 The Chinese Communist Party has banned all online sales of the Bible. (Image: via Wikipedia Commons)

As the Chinese Communist Party (CCP) issued a paper describing how it protects the religious freedoms of the Chinese people, at the same time it is banning online Bible sales.

The timing of these two incidences has not gone unnoticed by China watchers.

“For a government that just yesterday claimed to be supporting religious freedom, it is ridiculous that the core book of a major world religion — the Bible — cannot be found on the major Chinese e-commerce platforms,” William Nee, a researcher for Amnesty International, told ucanews.com.

On a day it which it appears that the Bible may have been banned, a Catholic Bishop is being "forcibly traveled", and hundreds of thousands of Muslims are in extralegal re-education camps, China has a new white paper on #religiousfreedom.https://t.co/zwOh0PBERM pic.twitter.com/nTzVmZTlg6

The basic premise pushed by the white paper was that: “Respecting and protecting freedom of religious belief is a basic policy of the CCP and the Chinese government.”

Despite the so-called religious freedom — under terms set by the CCP — the white paper likewise forwards the idea that religions need to follow the state’s agenda.

“Religious believers and non-believers respect each other, and live in harmony, committing themselves to reform and opening up and the socialist modernization, and contribute to the realization of the Chinese Dream of national rejuvenation,” it said.

The white paper made the point of “upholding the principle of independence and self-management,” meaning that the state would not tolerate foreign religions instructing its adherents.

“This principle is a historic choice made by Chinese religious believers in the Chinese people’s struggle for national independence and social progress, as Catholicism and Protestantism, which were known as foreign religions in China, had long been controlled and utilized by colonialists and imperialists,” the white paper said.

In a tweet, Pulitzer Prize-winning journalist Ian Johnston said he read the white paper and commented: “The basic line [of the white paper] is the same: the Govt is in charge of religion!”

I read it quickly and it seems like the usual recapitulation of the government’s policy after a new law or policy is enacted. I don’t see anything really new in it but I might be missing something. The basic line is the same: the Govt is in charge of religion!

Several days prior to the white paper’s release, the Bible was banned from being sold online by internet retailers such as JD.com and Taobao.

The ban began on Holy Saturday, the day before Easter Sunday, which is one of the most important Christian days because it celebrates the resurrection of Jesus Christ after his death by crucifixion.

Online sales of the Bible was the only way for people to buy the text if they wanted to avoid purchasing it through state-sanctioned churches.

Shanghai-born Warren Wang, 30, told the ABC that the Bible ban is typical of what China’s communists do.

“I’m not that surprised that they’re taking the Bible off the shelves now,” said Wang, a Christian who moved to Australian in 2012.

“This is a lot like something China would do — the Communist Party teaches atheism, and since Xi Jinping is becoming increasingly powerful, this is expected.”

Religious freedom is one of our most precious rights, one that should be enjoyed by all no matter where they are born. The Government of China banning online sales of the Bible is an assault on their citizens’ freedoms & on Christianity. Read more, here: https://t.co/YW9GzZIISE

The move to ban the Bible and the release of the white paper come as the communists have been upping their restrictions on religions. They also come as Beijing conducts closed-doors negotiations with the Vatican over the issue of how Catholic bishops are appointed in the country.

Catholics are divided in two in China, with some worshiping in state-sanctioned churches while others prefer to be members of the underground church and remain loyal to the pope.

Catholicism is one of the five recognized faiths in China; the other four are Buddhism, Islam, Protestantism, and Taoism, all of which are all strictly controlled by the state.

Watch this report from the BBC for more on the issue of the online ban of Bible sales in China: