Wild Pigs: The Price of Development in Hong Kong 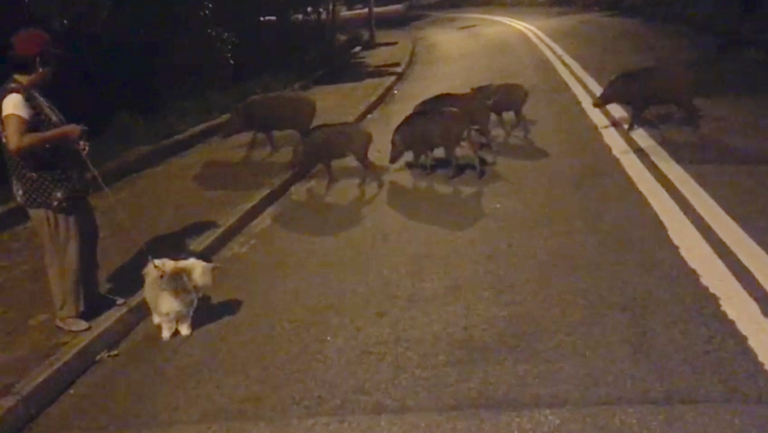 In Hong Kong, there are many mountains and hills inhabited by wild animals, including wild pigs. They roamed in the mountains and hills long before humans established themselves on the island. Due to the growing population of Hong Kong, the animals have been pushed into smaller areas. Today, most of their habitat has been taken over by human development. However, the animals have adapted to the situation. They survive by any means necessary and go deep into urban areas to find the food they need to sustain themselves or feed their young.

There have been a number of sightings of wild pigs in the South Bay neighborhood of Hong Kong. They usually appear in the afternoon, pilfering through the neighborhood looking for food in garbage cans.

It’s worth noting that these pigs have adapted to their environment and any humans they may encounter. Just recently, a pig was spotted trying to turn over a garbage can looking for food. The animal showed no reaction as people walked nearby. Pigs freely cross the street and sometimes just stand in the middle as if they are waiting for someone to give them food. It’s sad to see wild animals forced to search through people’s garbage because development and deforestation have destroyed their natural habitat.

Pushed out of their habitat by development

It turns out that there are at least three large apartment complexes under construction in an area inhabited by the wild pigs. The construction cut down trees and destroyed the pigs’ habitat and food sources. Consequently, it has become a common sight to see the pigs in the nearby South Bay neighborhood looking for food. The animals have never attacked any humans that they encountered. Even people walking their dogs report that the pigs never react. Some people believe that they are very hungry, and focused on foraging for food.

I thought that the reports of wild pigs roaming the South Bay neighborhood were just hearsay; however, one evening as I was walking with a friend, we witnessed a mother pig and her piglets not more than six feet away. We were shocked and just stood there observing the pigs, waiting to see what they would do. I soon noticed that they were just looking for food. These were the friendliest wild pigs that I have ever seen! Even as I walked closer, they didn’t show any sign of aggression. So I began taking photos of them.

In response to the rising number of people reporting sightings, the police have issued a notice making it illegal to feed the animals. Those who do face stiff fines.

What is the government doing for the wild pigs? Nothing, as of yet. Local residents feel sorry for the wild pigs, and wonder what the animals will do as development continues to push further into their habitat.

Story and images by Monica